Farewell Dear Rumbah :: parting is such sweet, um, delight ??? A Tale of Love... 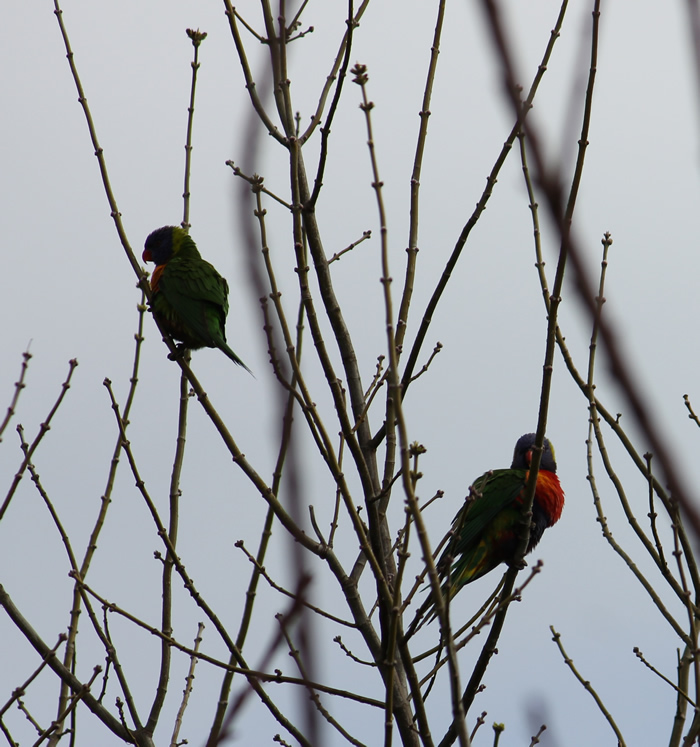 As today is traditionally dedicated to all of love's charms,
as the result of that cheeky little Cupid and his arrow,
it seems the perfect time to tell you a tale (or possibly a tail) of the power of love,
starring our beloved latte-addicted, food-obsessed, rainbow lorrikeet, Rumbah. 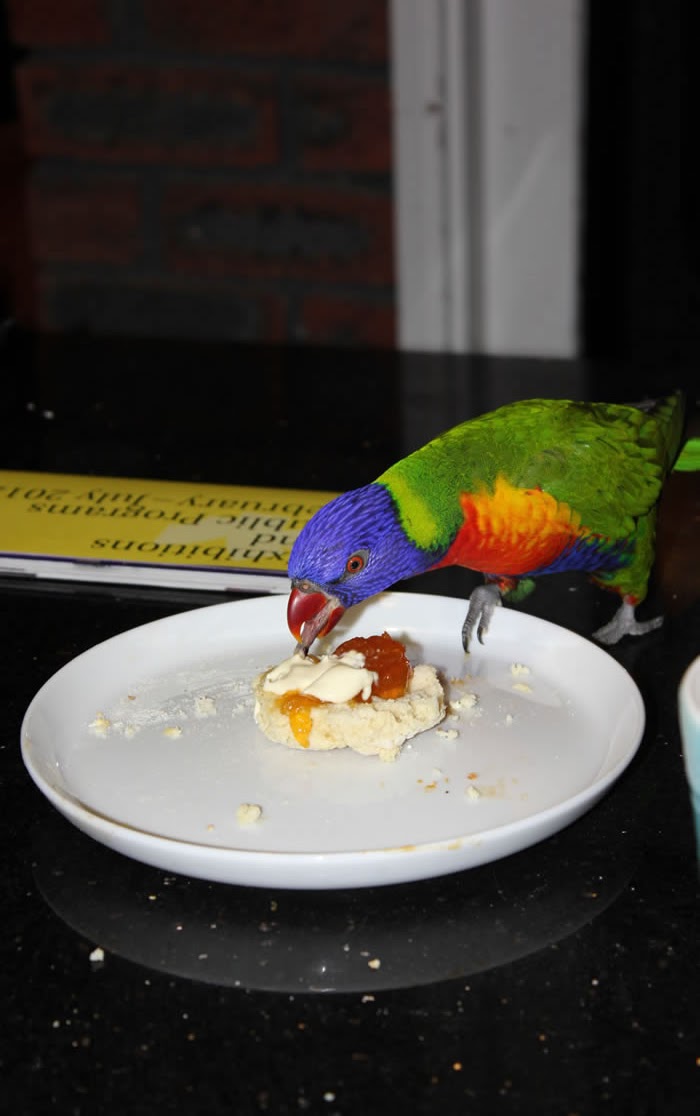 He of the "can I have what she's having?" appetite,
who has been known to prefer Malay curry over Indian (it's the coconut milk, you see),
raw biscuit mixture over baked (especially Anzacs, the favourite),
and spicy Asian inspired salads over pretty much everything else.
Except coffee.
Latte, to be precise. 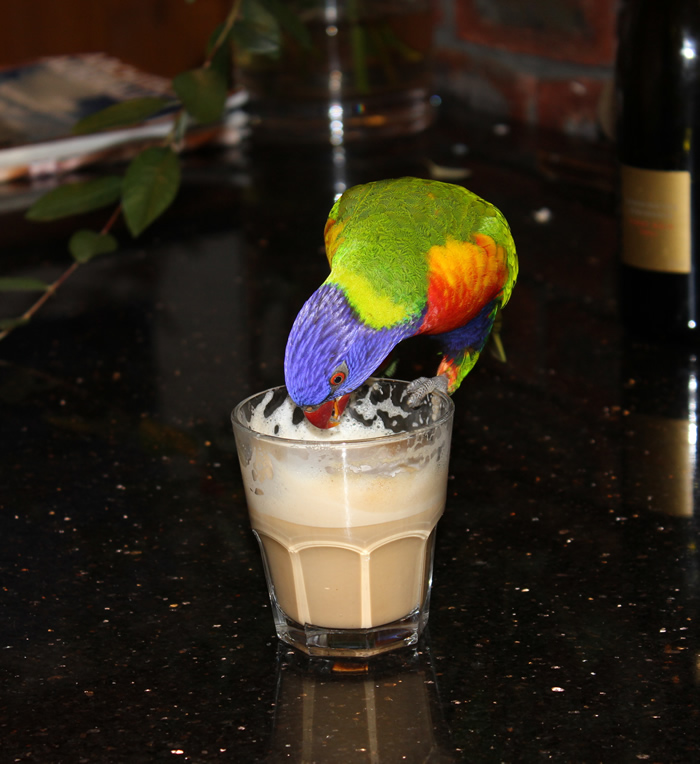 This bird so adores (code for addicted) latte that he can mimic the sound of the espresso machine.
Just as a hint, mind. To get one's thoughts collectively into order,
and to hurry the human process along.
He can also mimic the different ringtones of our various phones,
watching as we dived for our devices,
only to find him laughing and calling out "hello" as we put the phones to our ears,
with of course nobody at the other end.
Cheeky chap! 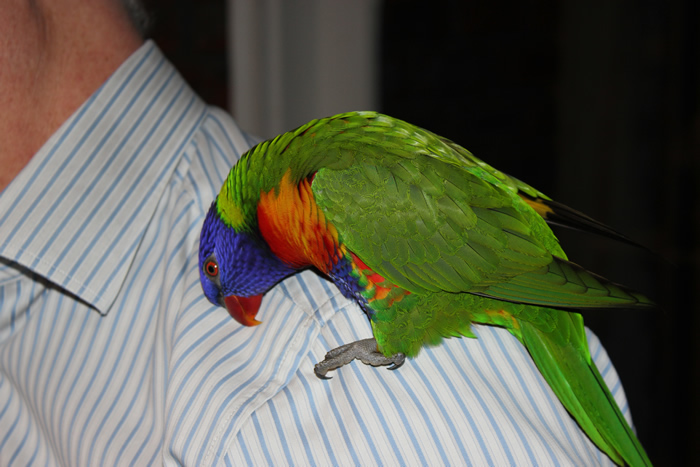 Now this decidedly gregarious fellow
(named Rumbah because of a propensity to dance wildly about when he likes something),
has been part of our family for 8 years.
Considering that rainbow lorrikeets can live for around 25 years,
I guess that makes him a spring chicken.
He was given to our eldest son on his 13th birthday,
after years of begging and cajoling to have a macaw, a toucan or a rainbow lorrikeet.
(You can imagine, considering the size and damage involved, why we opted for the latter.)
He rapidly became one of the family,
sitting on shoulders as he is here,
head cocked on one side, listening, thinking, plotting the next mischief.
And having free reign to fly about the house as he chose,
returning to his cage (or palace, as a friend described it once) for night time roosting. 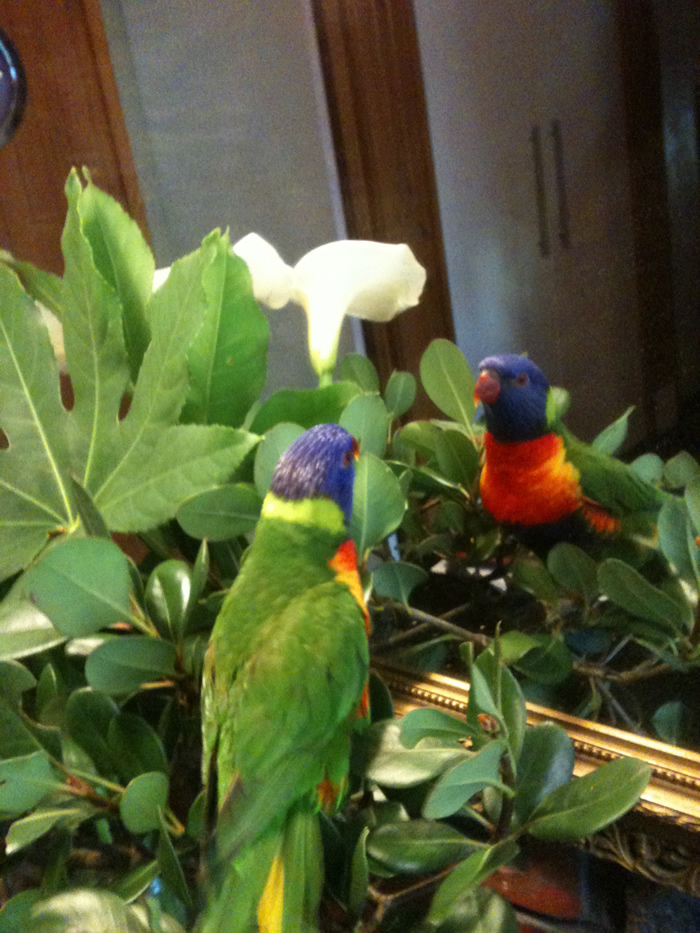 But after 8 years of happily co-habiting with his human family,
and admiring his own handsome self in the mirror,
something happened late last year.
Suddenly, the wild lorrikeets that landed on his cage,
(when it was put out on the deck in beautiful weather)
and who had always been an annoying distraction to him,
held amongst their numbers Rumbah's one true love.

So instead of ringing his bells to shoo away these pesky wild birds,
as he had always done,
we spied him feeding a particularly dainty bird scraps of his food through the bars.
Unlike the others, she had an orange breast - not red.
So it was rather noticable that every single day this little bird would sit on his cage,
for hours on end,
accepting his gifts of fruit through the bars which cruelly held them apart.
What were we to do?
At the same time, Rumbah changed from the docile adorable fellow he had always been,
to a raging monster, biting out toes and nipping our fingers.
Drawing blood on the hand of his hitherto master,
in shrieks of shock as much as pain.

In desperation, I dashed off to see our "bird lady",
a wise fount of all knowledge at our local avarian shop,
and begged for guidance.
"Rumbah is in love, it's plain to see" she said.
But what to do about this unrequited love?
Surely, we couldn't let him free into the wild to be with her,
he would last a day.

"Oh no, love will win out if it is meant to be" she advised.
"Let him out in the morning when the Loved One is there.
If he comes back at nightfall,
it will be because she has rejected him.
If he stays out all night, she will have accepted him."

So with heavy and anxious hearts,
we opened the door to his cage,
with nothing but the big blue sky to contain him.
At first, this was a great adventure.
He sat on my shoulder as I weeded the garden, happily twittering away.
But then, she flew nearby.
That was it. He was after her. All afternoon they flew around and about the garden.
And at nightfall, he wouldn't come back, but sat defiantly upon the palm tree,
his new wife by his side,
calling and calling us until we came out to see his Beautiful Bride. 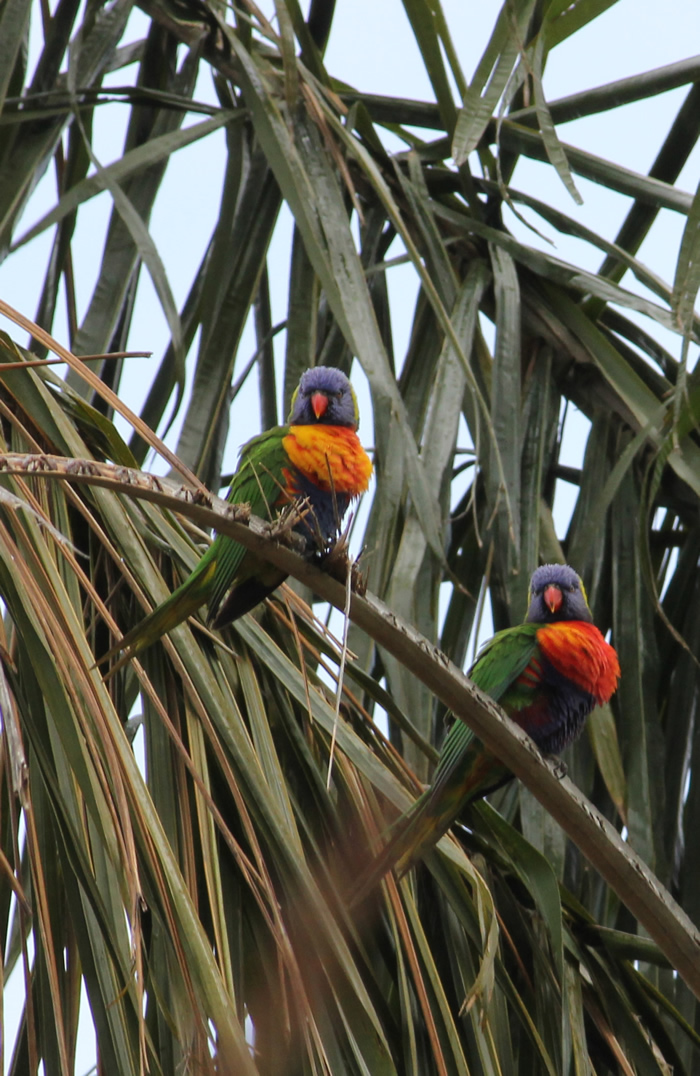 And this is she - Mrs Rumbah - the bird on the left with the orange breast.
While Rumbah is sitting on the right,
all puffed up to look more impressive to her.
Not that he needed to. They were in lurve....

And everyday, from that spring morning late last year, Rumbah would call from the garden.
"Look at me, look at my beautiful wife", I am sure he was saying. 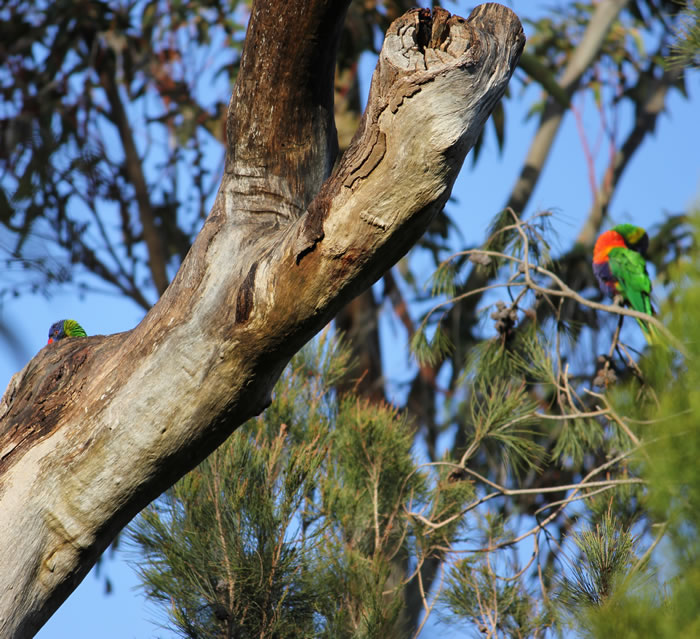 A few weeks before we left Mt Eliza, his call was more insistent than usual.
On wandering around the front garden,
I finally found the source of the racket.
He wanted me to see the nest that his wife was building.
(That's Mrs Rumbah on the left, head popped out of a hollow spot in the Manna Gum.)
He, being male, was busily preening his feathers while his wife prepared the nest.
(Actually, that's misleading - because in the next moment, they swapped locations and duties.
I'm just being cheeky...).

And the morning we left our old house, he swooped the car, his wife by his side, calling goodbye.
But he needed us no longer. He had love instead.

So the moral of the story is,
all's well that ends well, and that true love will trumpet all.
Our son has finally forgiven us for letting his beloved pet bird go free,
because once he saw Rumbah in love, it was all over really.
Not so much "goodbye" as it was "fare thee well" quite literally.
Parting was only partly sweet sorrow, because Rumbah's happiness depended on it occurring,
so it was more of a sweet delight.

And it just goes to show,
that Cupid's arrow can strike hard and fair at any of our hearts,
human or lorrikeet, or any creature at all,
rendering resistance quite utterly useless!