The Opal of October :: as multifarious as life itself... 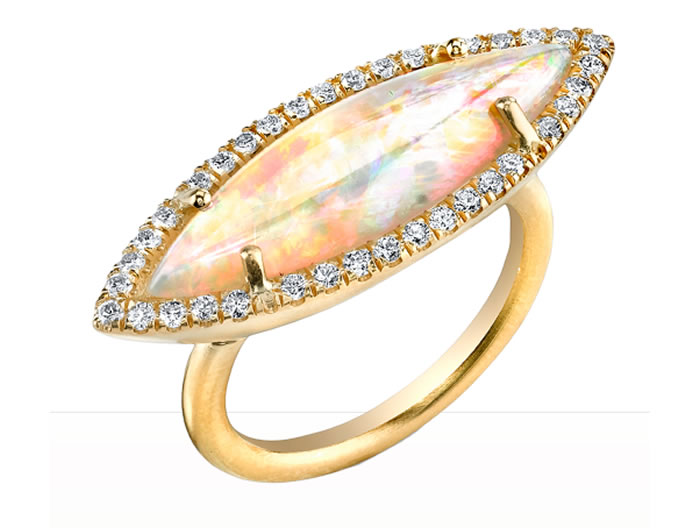 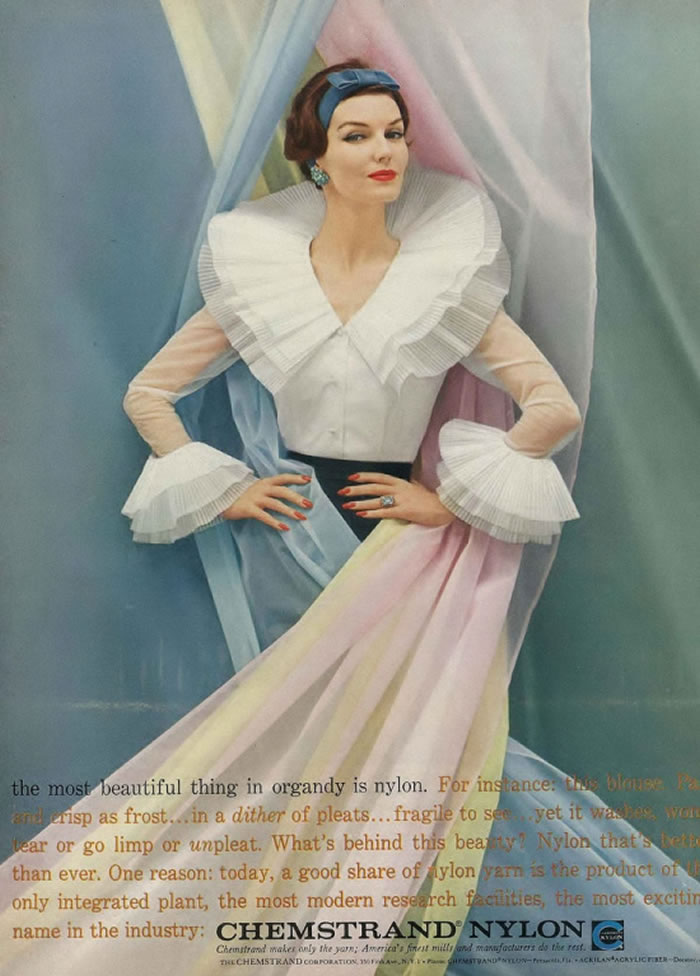 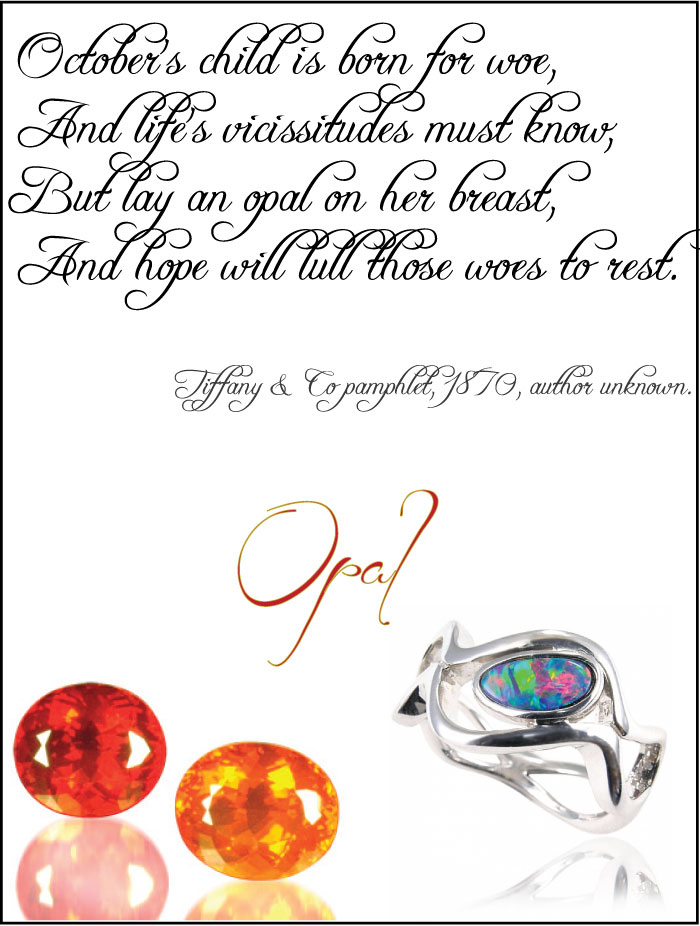 As the only birthstone which comes in absolutely any colour,
the beautiful Opal of October is
a gem reflecting the colour and pattern variations found in nature's bounty.

From palest ivory, tinged with blush pink, in Milk Opals
through cobalt blues & emerald greens in Black Opals,
to the lively radiance of the Fire Opal in lustrous orange and red,
this is one gem which simply will not be categorised.
But let's have a look at its story to discover a little more... 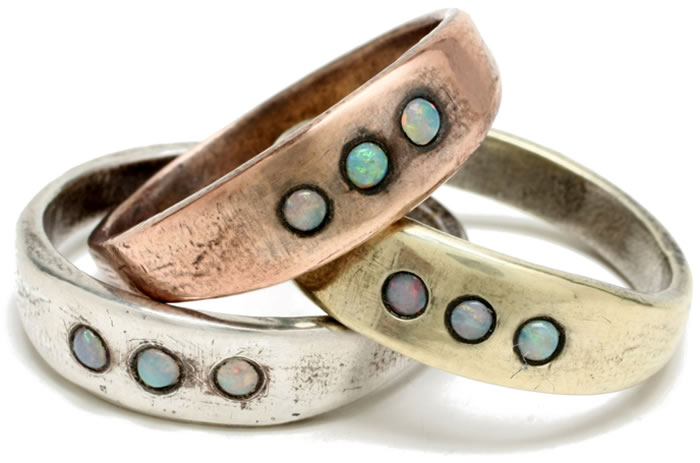 An Opal is composed of silica,
in a non-crystalised form,
and generally holds around 8% of its own weight in water.
So it's not a crystal, and it's not a mineral,
but is described as being in a mineraloid form
(which means a mineral-like substance which isn't a crystal).
Just over 97% of Opals are found in Australia,
where it is our national stone. 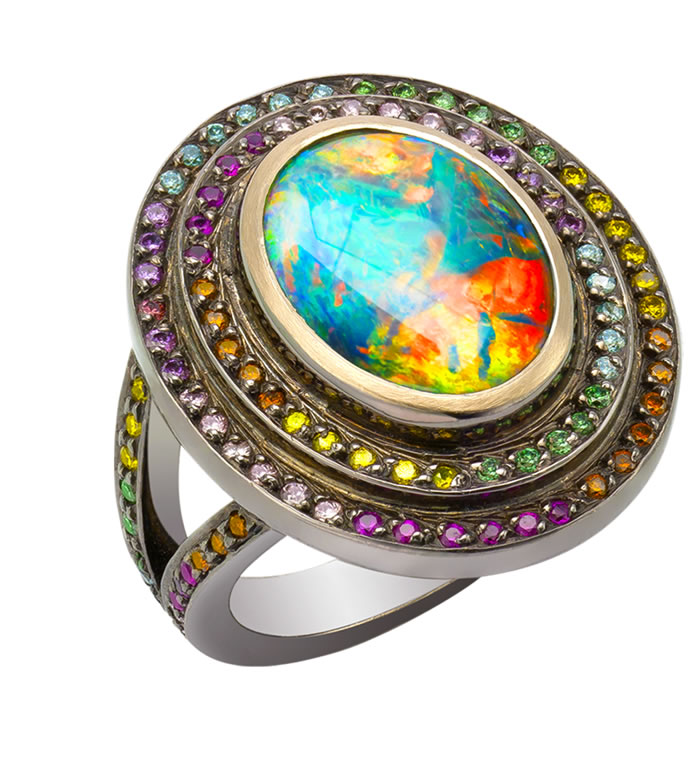 Opals are classified into "common" or "precious" depending on their colours and liveliness.
To be classified as a gemstone, they must have the characteristic "play of colour",
which we generally associate with the gemstone. 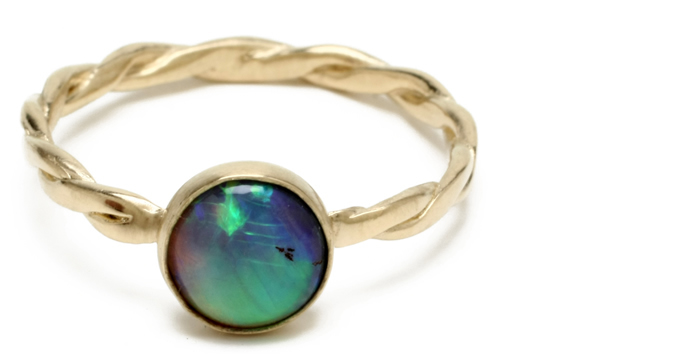 The most valuable are Black Opals
(like this ring, set in a band of twisted gold)
which have a black or grey background,
helping to define the colour intensity and variations. And while the Milk Opals, which lack the play of colour, are considered less valuable,
they are still incredibly beautiful,
drawing one's view into them in an almost mesmerising fashion.

Finally, the last main group are the Fire Opals, in orange, yellow or red
(and which are shown in the birthstone poem above).
They do not generally exhibit the play of colour of the more valuable gemstones,
but their intense colours make them rather amazing.
They are mostly found in Mexico. 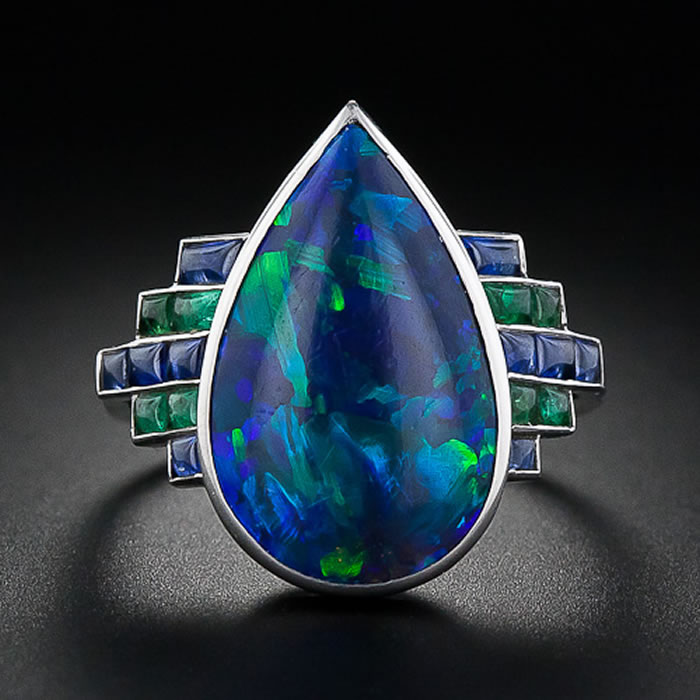 The name "Opal" is thought to be derived from the Roman term "opalus" (seeing jewel),
the Ancient Greek word "opallios" (to see colour change),
and the Sanskrit "upala" (precious stone).

It's a stone of many legends.
The Ancient Greeks thought Opals were Zeuss' tears of joy;
while the Indian Goddess of the Rainbow turned herself into an Opal
to avoid the relentless attentions of the male gods who were enamoured by her beauty. 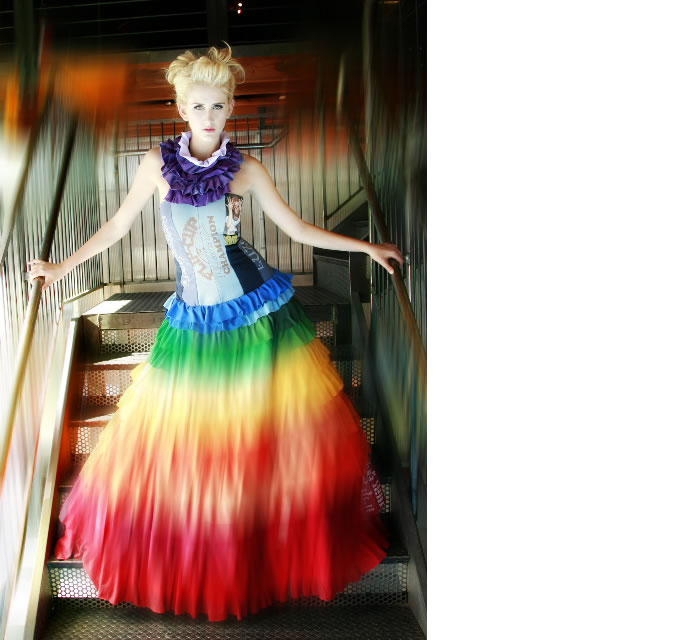 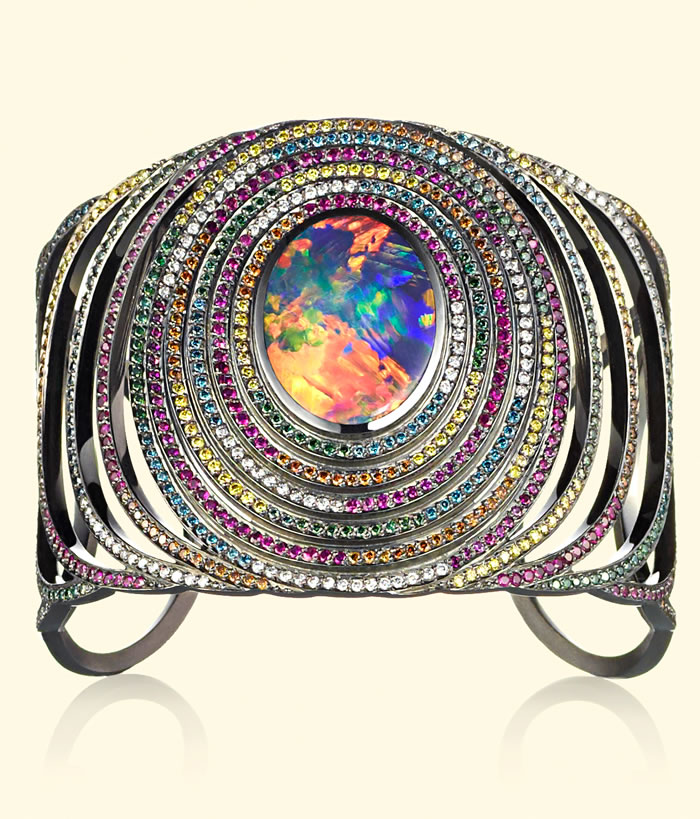 In Australia, the Opal features in many Dreamtime stories,
mostly involving rainbows.
In one Aboriginal story, the Rainbow Serpent,
on his journey to spread a message of peace,
during the creation of the world,
left behind footsteps made of Opals, embedded in the land.

Opals were used in Kenya around 6000 years ago to decorate artifacts,
and archaeologists have found Opal mines in Virgin Valley, USA,
dated around 10,000 years ago.

Around 250 BCE, in Rome, the Opal was considered the most valuable of all gems,
and was imported to Europe by the Bosporus traders, who in turn brought it from India. 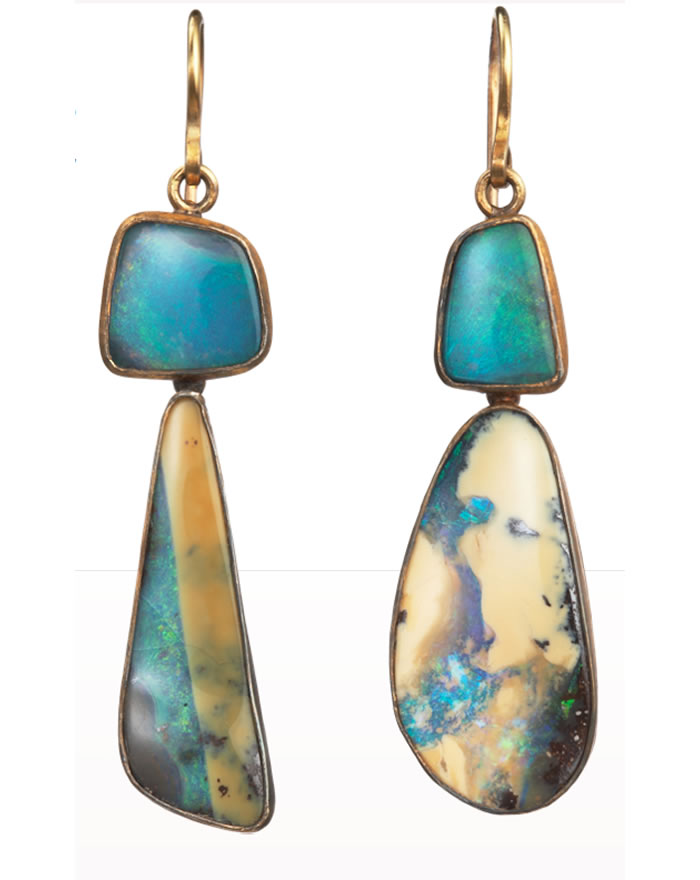 During the Middle Ages,
Opals were associated with brilliant luck.
Because this kaleidoscopic stone came in every colour under the sun,
it therefore had the magical power of every gemstone whose colour it shared.
Or so they believed.
Pretty good sales line, don't you think? 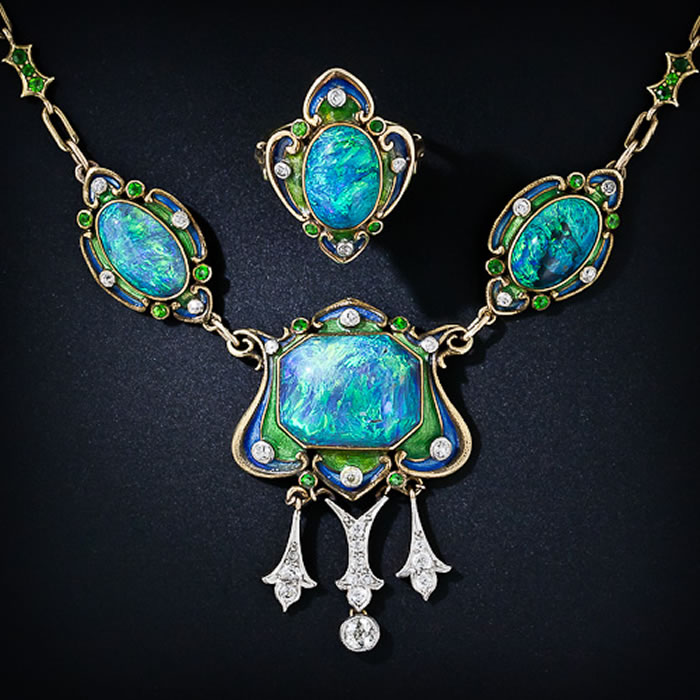 But in 1829, Sir Walter Scott published his book Anne of Geierstein,
and our beautiful Opal's history changed dramatically.
In the story, one of the characters,
the Baroness of Arnheim,
wears an Opal with magical powers.
But all goes wrong when a drop of Holy Water falls upon the stone,
whereupon it loses its colour and becomes bad luck.
The fate of the Baroness was sealed, of course.

Because of the popularity of Scott's book,
sales of Opals in Europe plummeted by 50% the following year.
It's the origin of the reason why some people still believe the Opal to be unlucky. 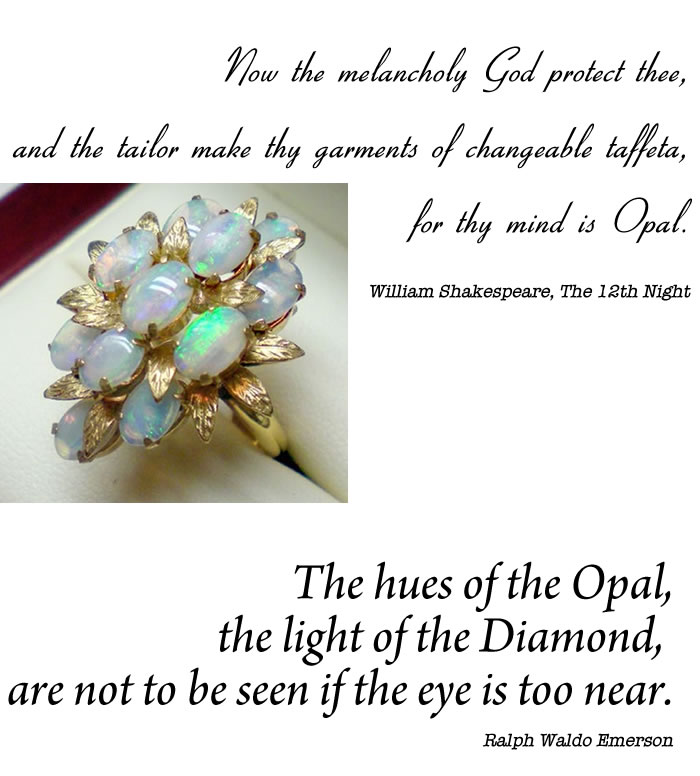 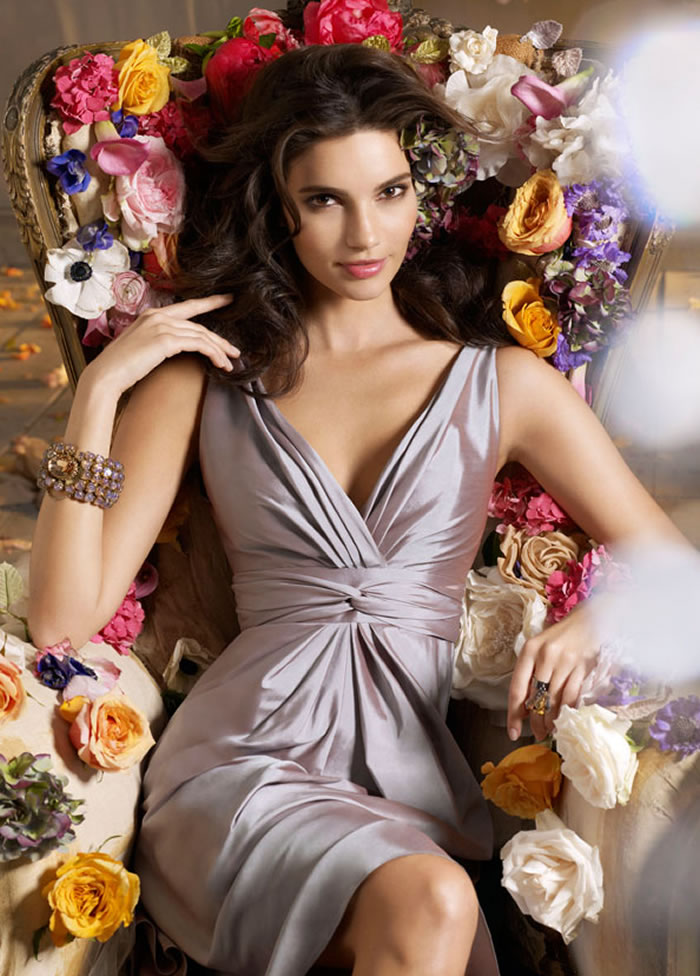 William Shakespeare's reference to opal includes mention of "changeable taffeta",
with its uncanny ability to reflect different colours in different lights.
Today, it is still called Opal Taffeta for that reason.

And interestingly, to describe something as "opalescent"
means it displays the various colours as does an Opal, but with little opacity.
However, it can also refer to something which is
milky, pearly, lustrous, rainbowlike, prismatic, or variegated.
So there's about as much variation in the meaning
as there is in the stone!! 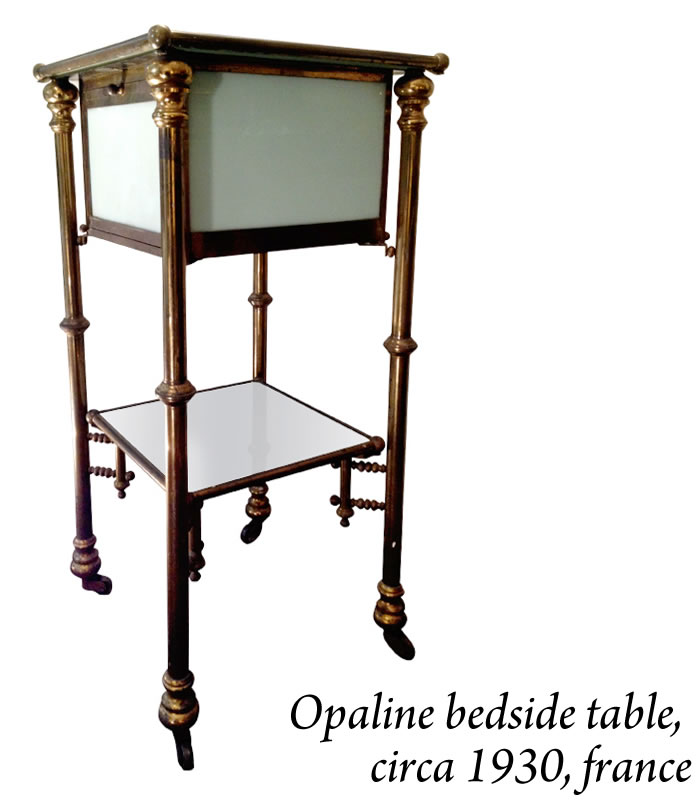 Opaline is a term referring to milk glass, which was hugely popular both in Victorian times,
and again during the Art Deco period.
It was largely used for chandeliers and inlaid shelves on furniture. 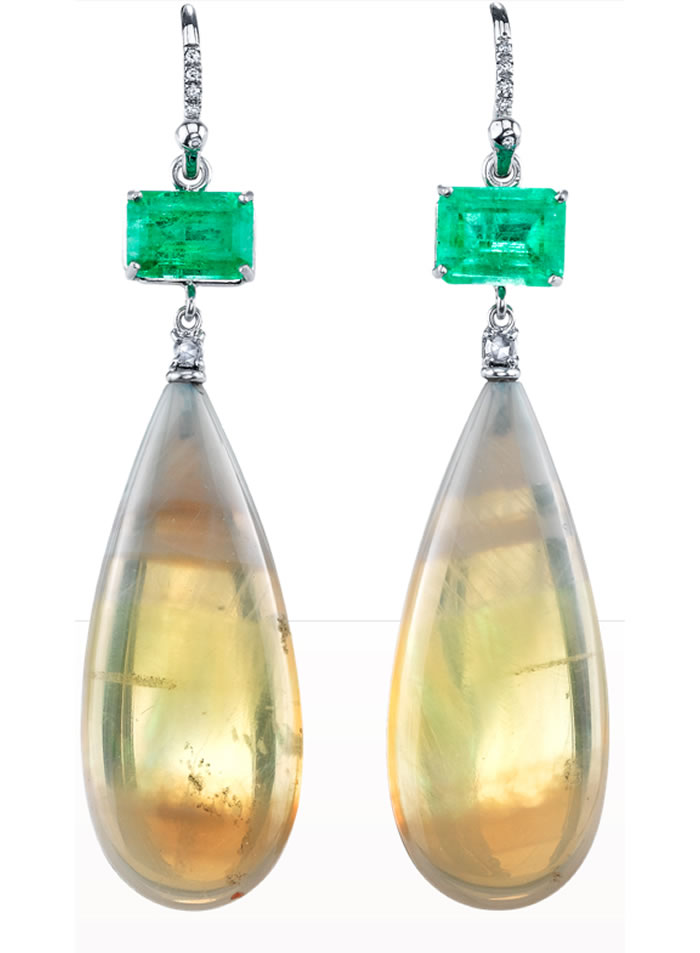 So the Opal of October comes in pretty much every colour combination possible,
and in so doing can impart a different type of beauty depending on its tones.
From the delicacy of these Resin Opal earrings,
set with Emeralds,
to the intensity of the Black Opals in greens and blues,
or the wild glow of the Fire Opals,
this is one little gem that simply likes to have it all.

And just like the rainbow,
the lucky Opals can take our breath away with the complex beauty of nature.

Labels: Birthstone of the Month, opal