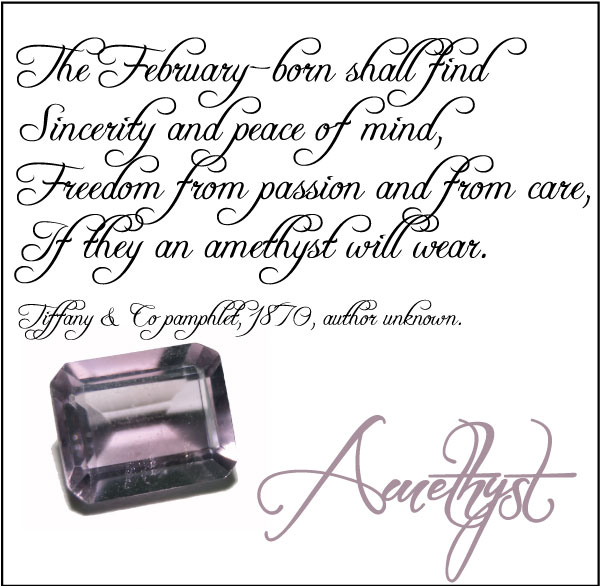 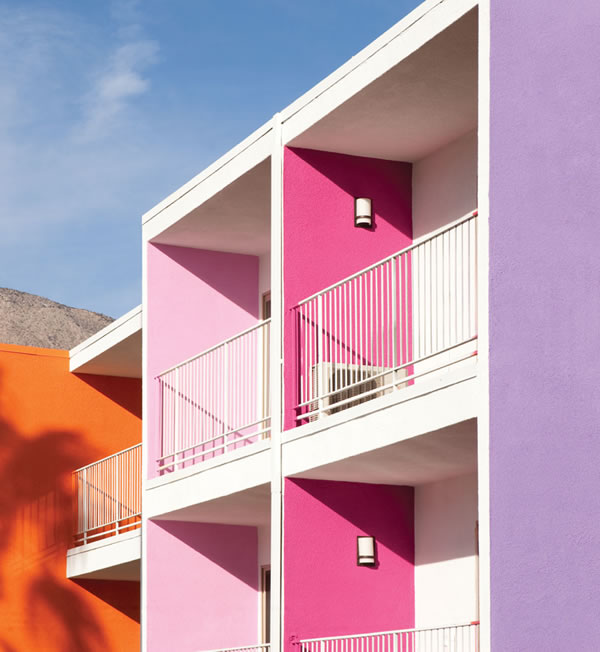 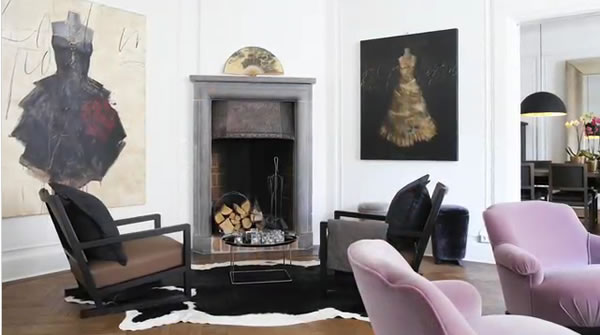 Way back yonder in 1870,
the eponymous jewelry store Tiffany & Co
produced a pamphlet extolling the virtues of birthstones.
Each month was represented by a poem,
of unknown origin,
but simply referred to as the "Gregorian Birthstone Poems." 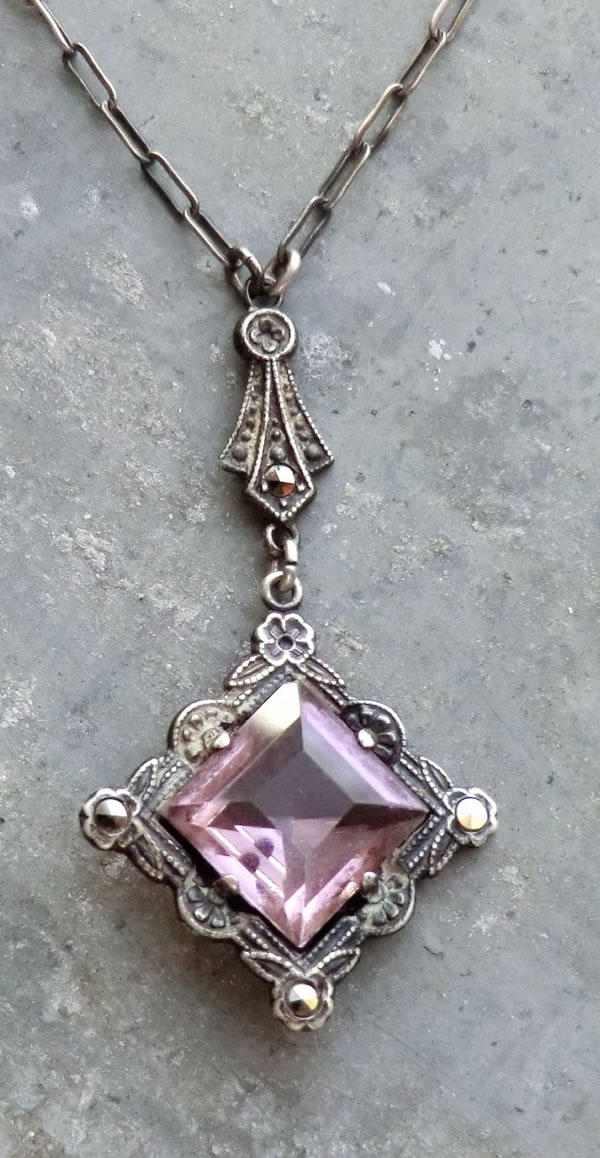 As today is February 1st,
I thought it may be fun to have a look at February's birthstone,
which is, of course, the amethyst,
as part of a new series to mark the beginning of each month. 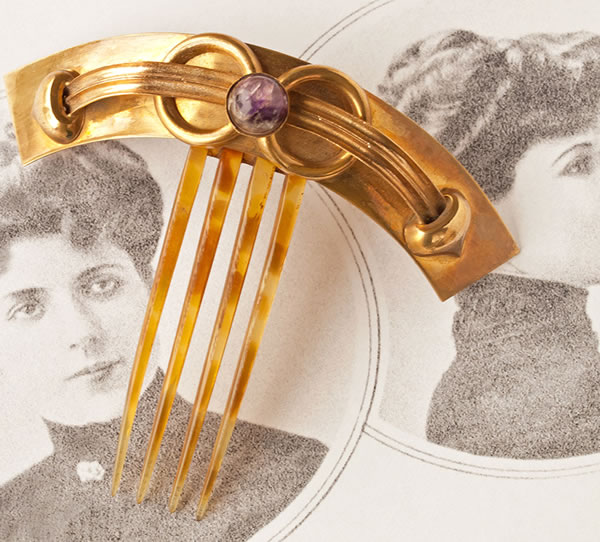 Treasured by the Ancient Greeks & Romans as a jewel to ward off
the temptation of Bacchus
(the god of wine)
the name, from Ancient Greek, literally means "not intoxicated".
It was believed that a person wearing amethyst,
or even drinking from a cup made from it,
would be able to avoid intoxication.
Nice idea. 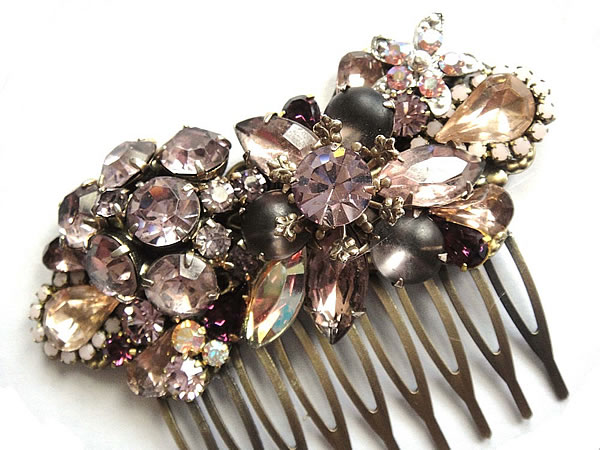 Amethysts are quartz, and range in colour
from pale pink to a rich dark purple. 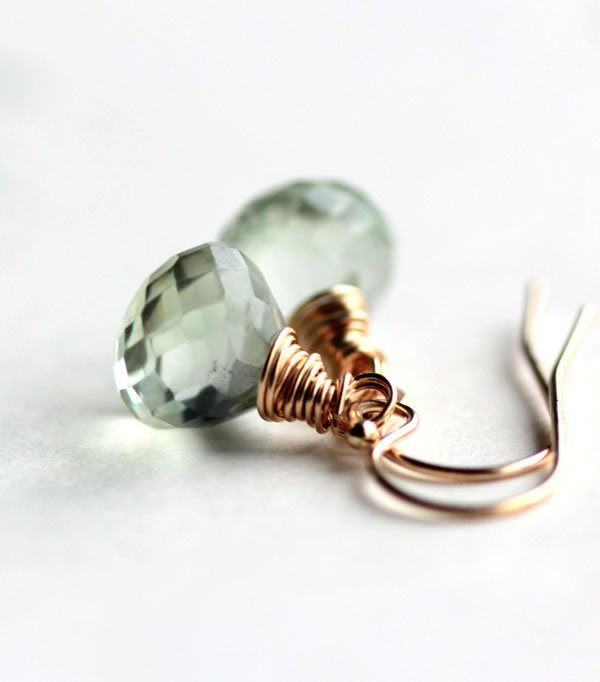 The so-called "green amethyst",
whilst very beautiful,
is not a true amethyst.
It is really Prasiolite, which is also a quartz,
but does not have the necessary red and blue undertones
of true amethyst. 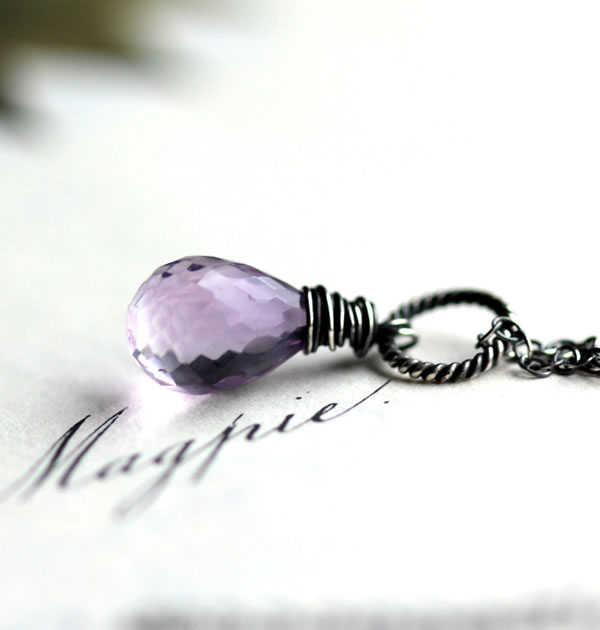 In medieval times, it was believed that amethysts possessed the
power of healing,
and they were worn as amulets in battle by European soldiers.
Until the 18th century,
when new sources of the gem were found in large quantities,
amethyst was one of the cardinal gems
(which includes diamonds, sapphires, rubies & emeralds). 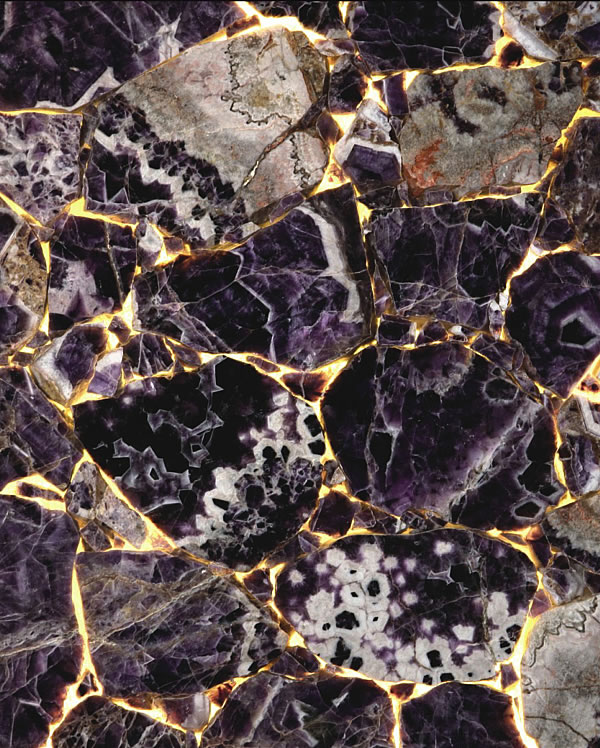 One of the more dramatic uses of this gorgeous gemstone
is as cut slabs,
used for benchtops & feature panels.
Especially when backlit,
the gems take on the most mesmerizing of patterns. 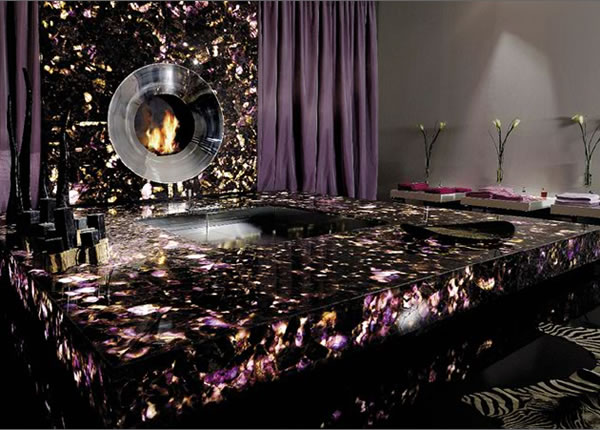 I'm left a little speechless here.
This is from the UK based Stone Source.
Utter, utter glamour.
Perhaps Cleopatra may be about to arrive. 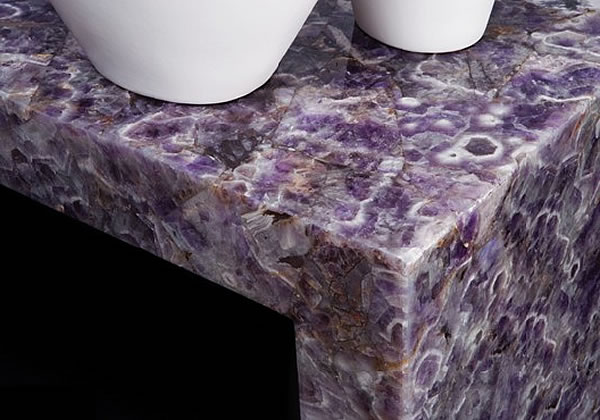 The amethyst can be used for vanities or dressing tables too.
This product is from Caeserstone, and is part of their Concettous range,
which combines semi-precious gems in a base which is durable. 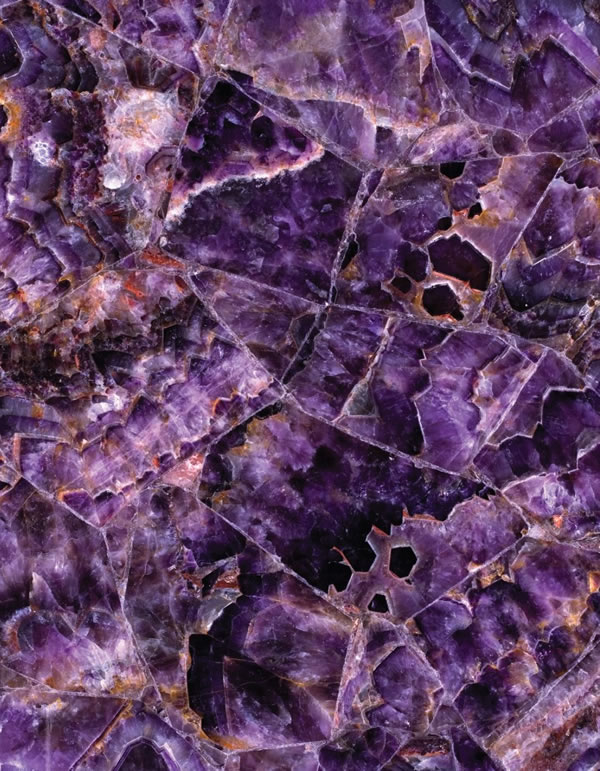 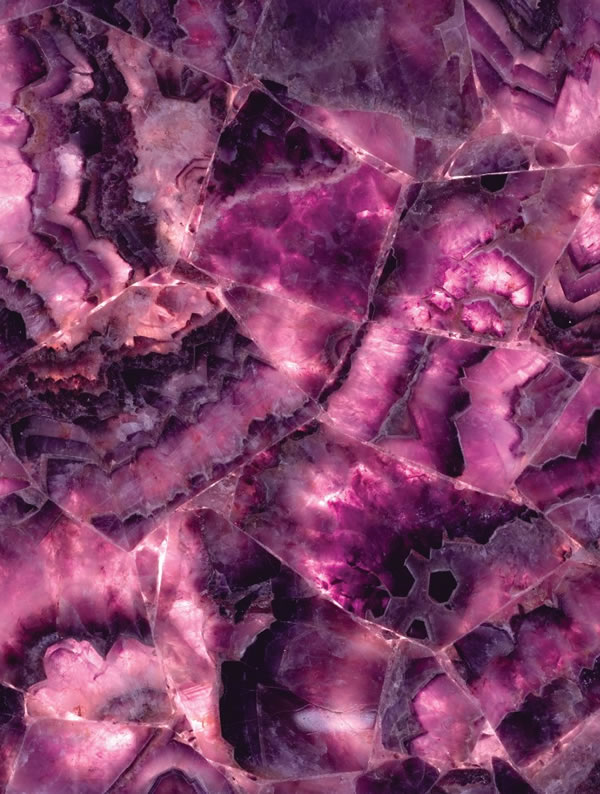 ...or backlit.
Which brings out a quite different glowing effect. 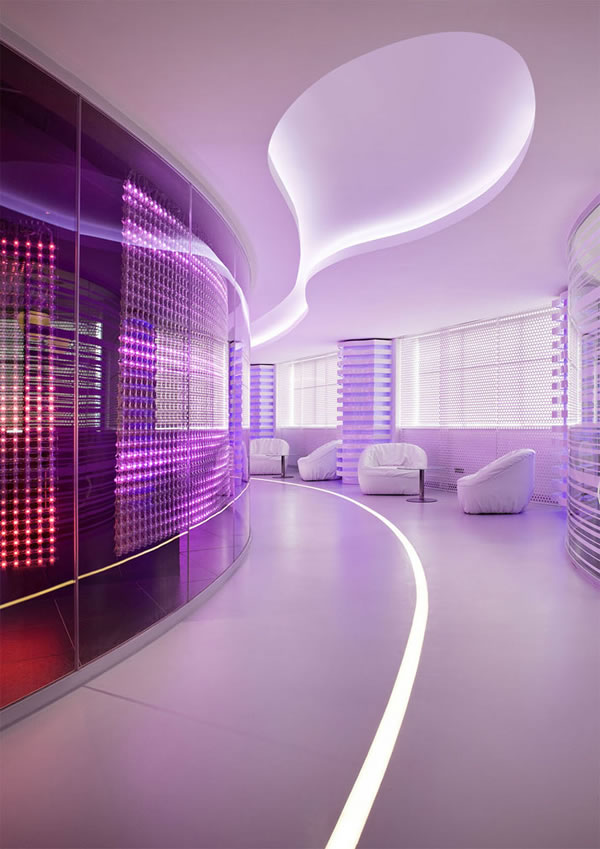 And whilst the gems are gorgeous,
the luminous tones of amethyst can be used not quite so literally
in interior design too.
This is the IBM Briefing Centre in Rome,
and the colour of the gem has been introduced through lights & glass
to create an atmosphere of well, shall we say, healing? 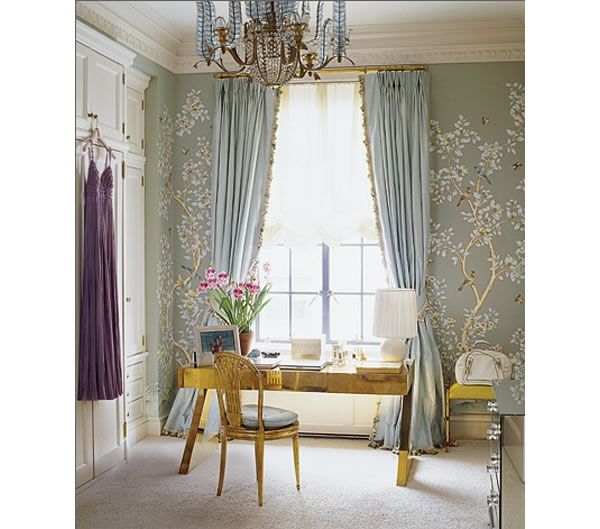 Aerin Lauder's dressing room uses just a hint
of amethyst, in the hanging gown, to inject a little drama. 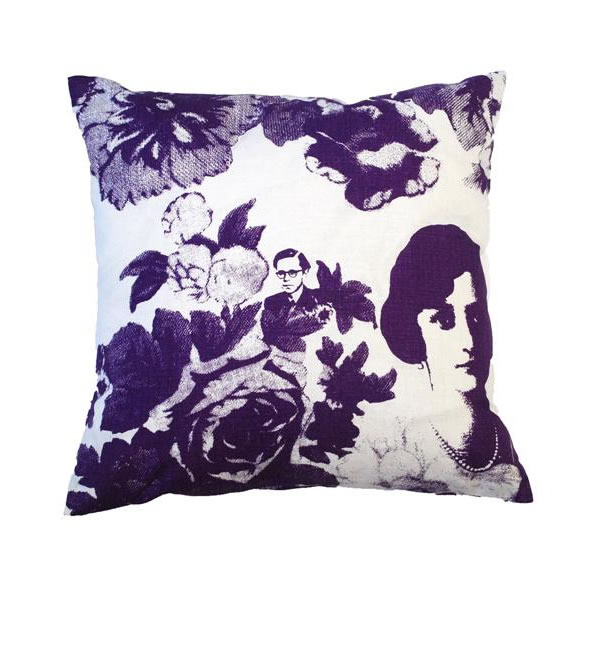 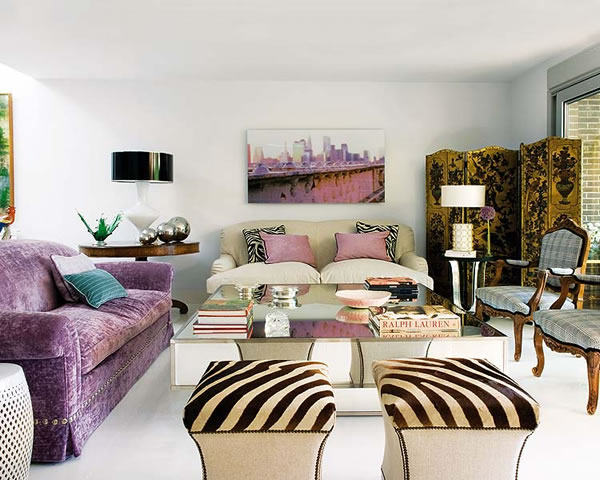 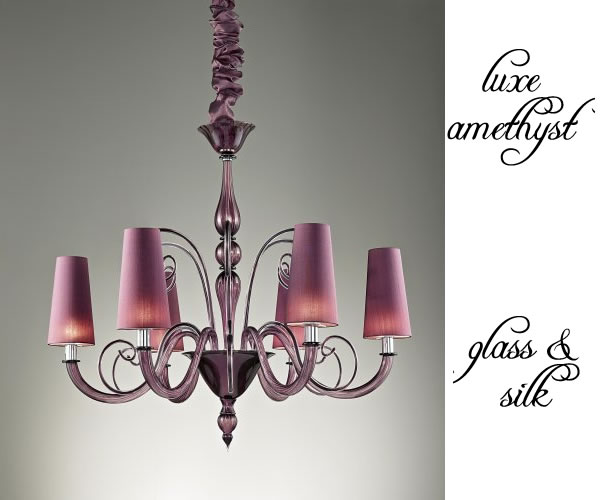 English lighting company Chelsom produces a suspended
light simply called "Amethyst".
It has a bit of an Art Deco feel to it,
so it's got my attention.
The twirled glass prongs combined with the sleek lampshades
are a wonderful contrast. 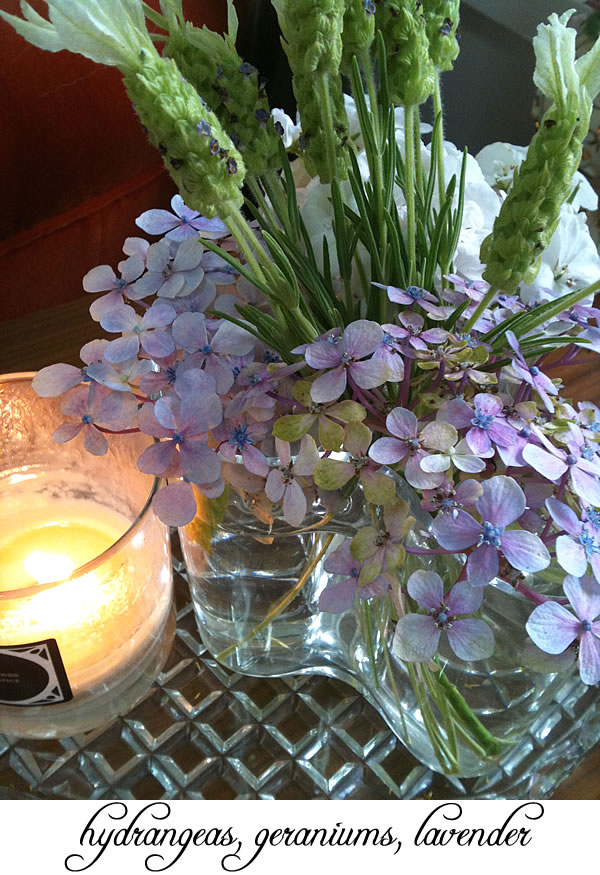 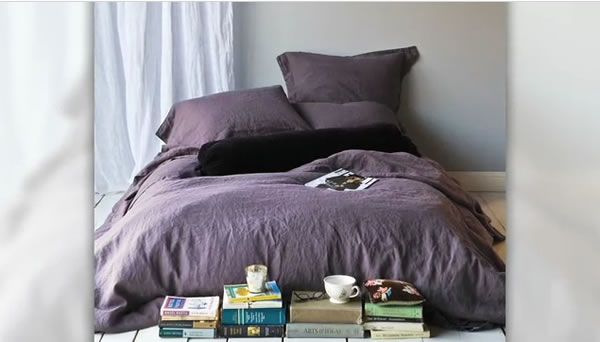 Informal or formal - this is a colour which works well against
natural textures and tones.
Here it appears as a crushed linen,
in a berry shade,
as if the fabric were simply dip-dyed in a luscious bath of juicy blackberries. 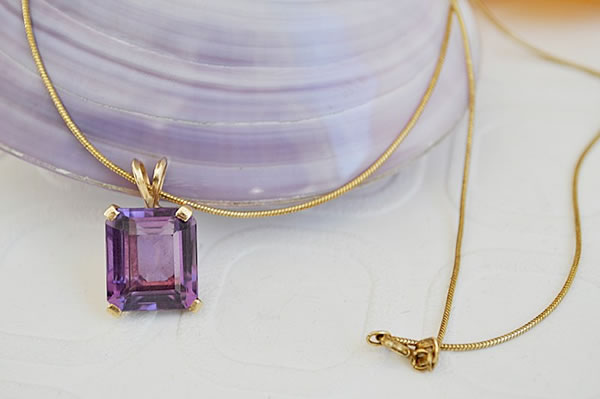 So this delightful little gem has much beauty to extol,
whether it is used as jewelry or simply as inspiration for colour schemes.
And it is truly worthy of being counted as one of the 12 birthstones.