Out + About :: Jeffrey Smart at the TarraWarra Art Gallery... 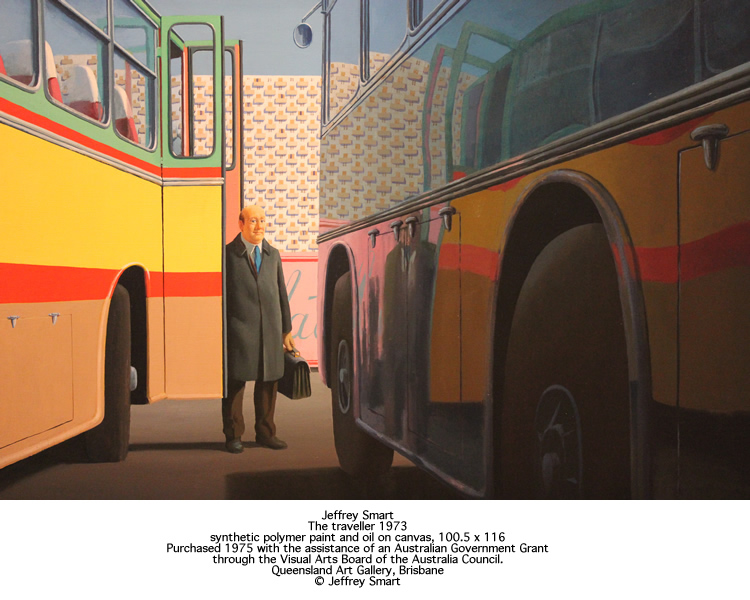 Now if I had to pare down my very favourite artists to just a handful,
(the rationale being those clever creative types who make us look once, twice, thrice
to see more in each artwork in every glance),
then Jeffrey Smart would be in the curated list.

As a small child, on visits to the Art Gallery of South Australia,
it was always his works which I asked to be allowed to see first,
because their mix of realism and wit utterly captivated my young imagination.
Here was a painting which was as real as a photograph,
and yet it wasn't: it was so much more,
because it was layered with gentle satire and observations of modern life.

So when I discovered that a collection of over 40 of his works are currently on display
at an exhibition at the TarraWarra Museum of Art
I was there with my ears pinned back,
eager to explore more about this Australian painter's works.
The collection covers his artwork from 1940 through to 2011,
when he retired from painting. 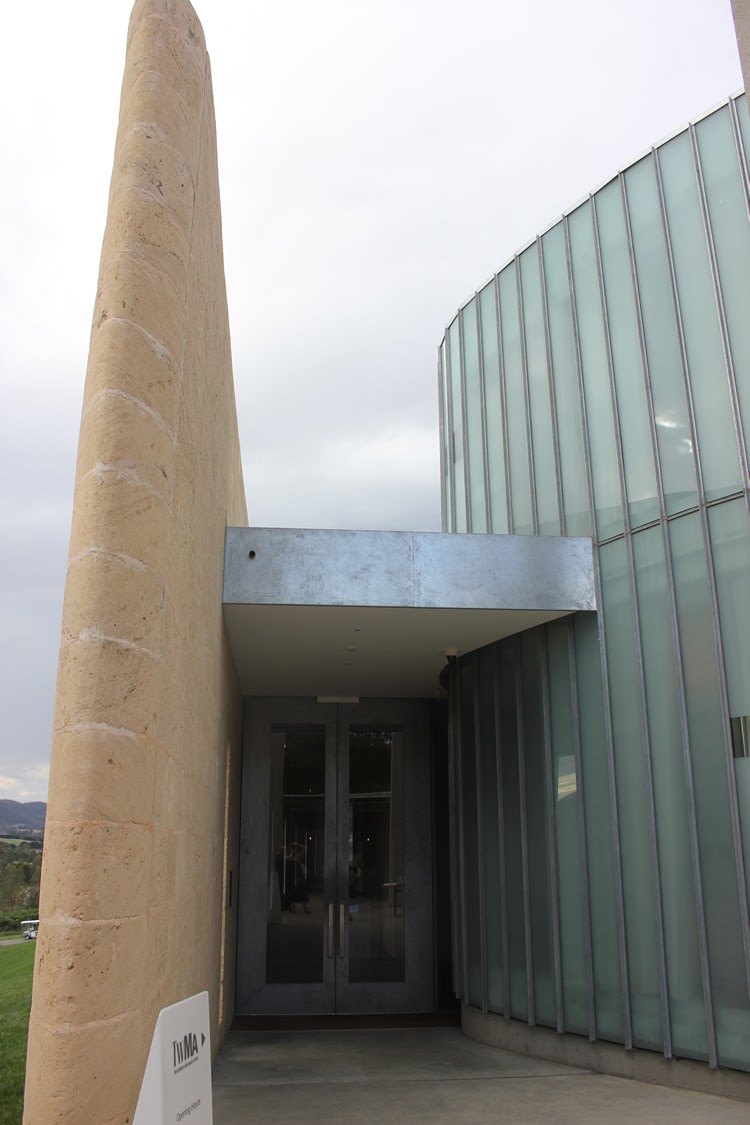 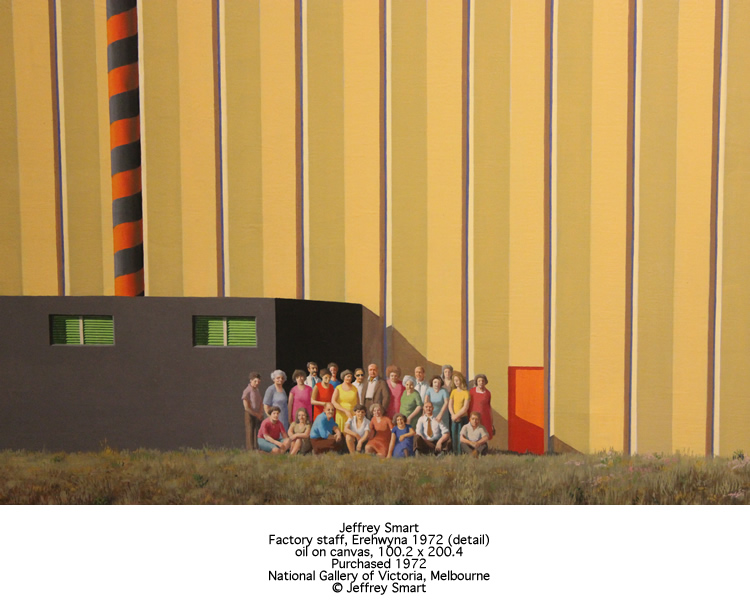 In playing with large urban spaces - mostly of areas not considered beautiful by traditional thinking -
and placing human figures strikingly amongst them in considered locations and poses,
Smart was able to inject a sense of a mutual glaze frozen in time:
while the subjects look at us,
we look at them and their setting. 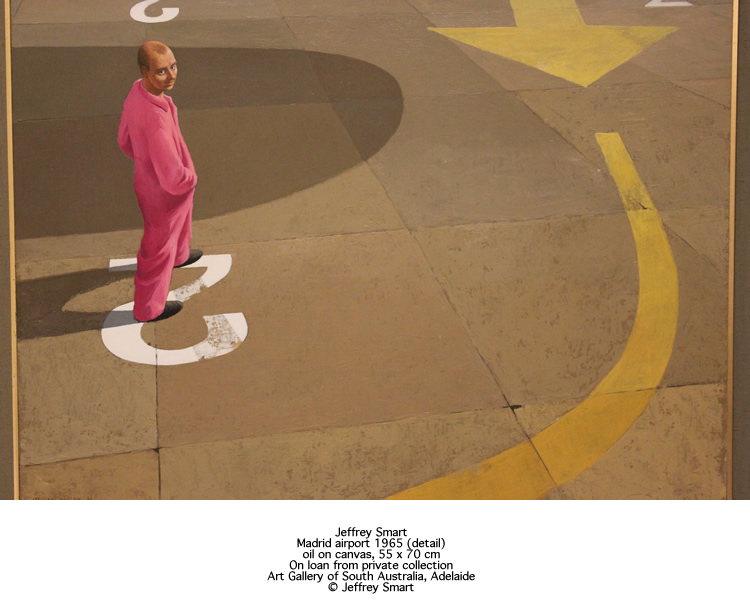 And sometimes, they look away... 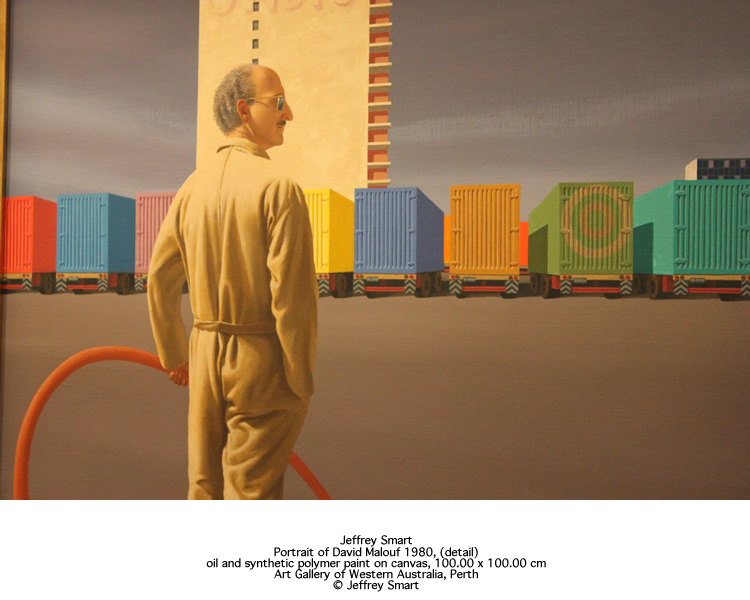 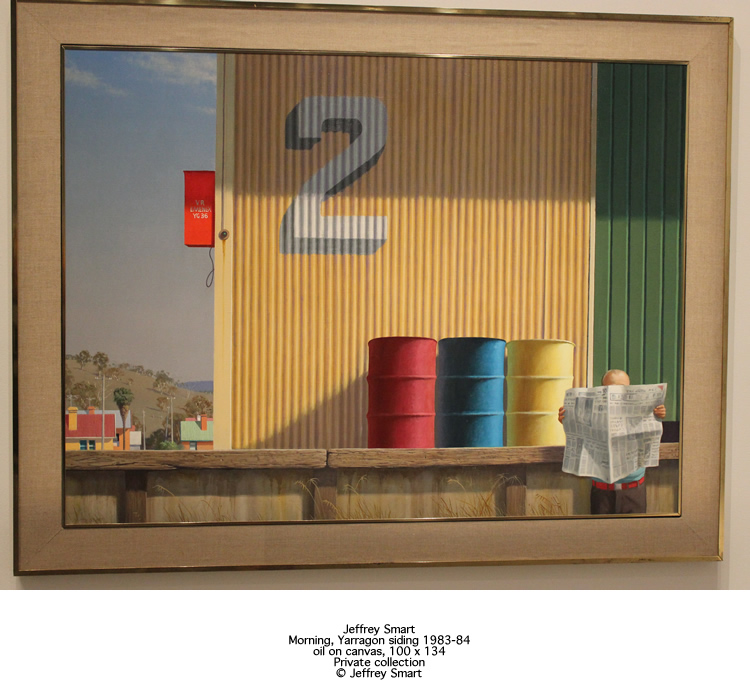 It's the extraordinary clarity which draws me into these artworks:
the precision and detail. 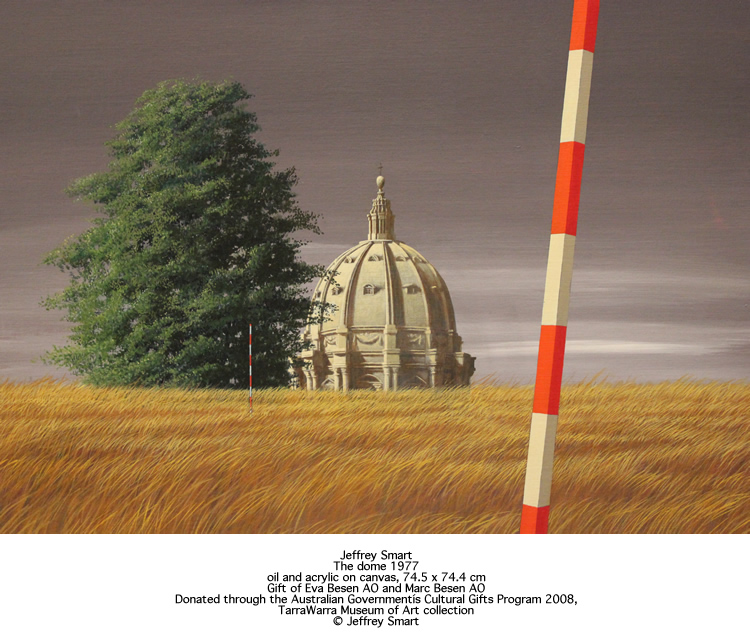 But it's not just about humans. Well, not just the human figure, at any rate.
Some paintings are more about the result of human activity:
the spaces and places we create. 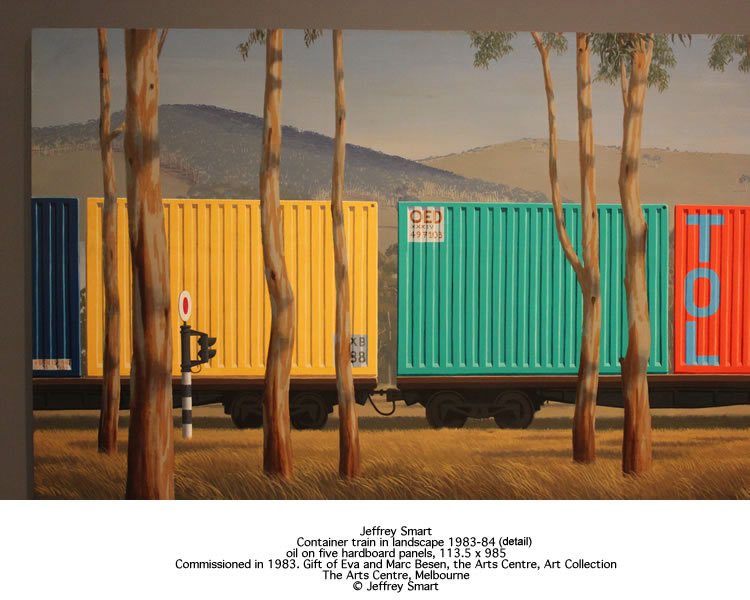 Smart explored the way we interact with spaces,
both in the country and the city,
with a special fascination for bridges, roadways and industrial areas.
They are almost the accidental spaces,
the kind which are not designed,
but which are formed between and betwixt the ones which are planned.
(Like the space under a freeway bridge or the interaction of this freight train
with the natural bushscape.) 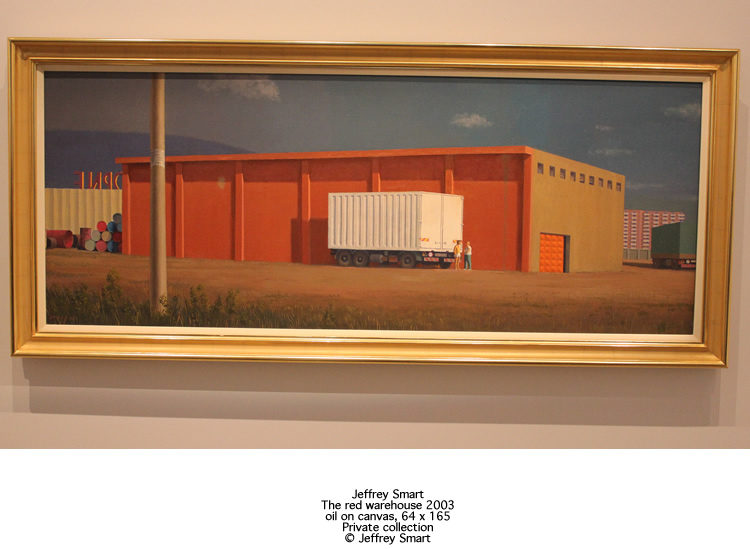 One of his most famous paintings is this one below,
Portrait of Clive James, and usually held in the Art Gallery of NSW. 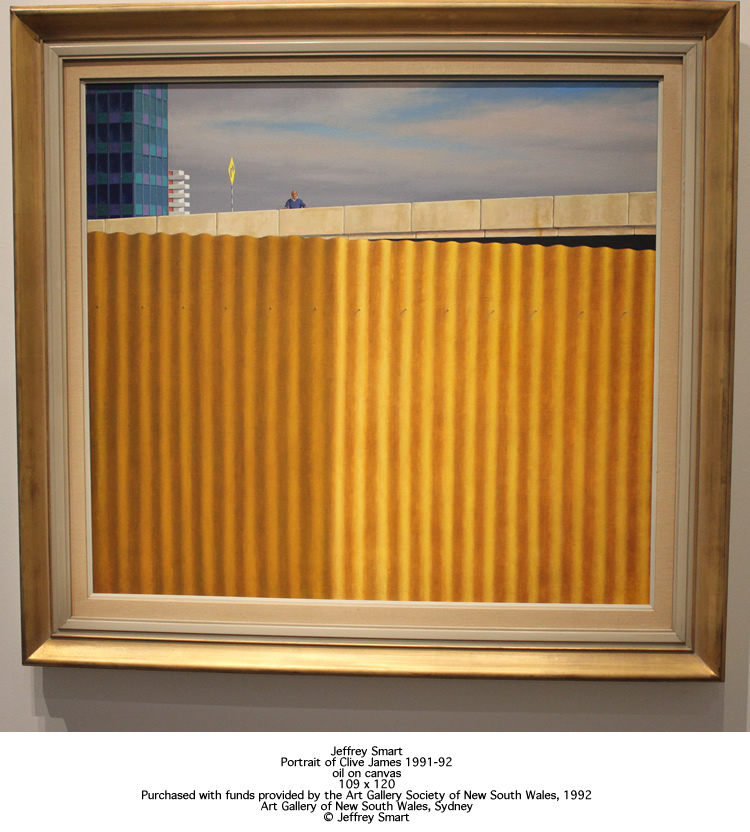 You have to look very carefully,
almost with a magnifying glass,
to find Clive James.... 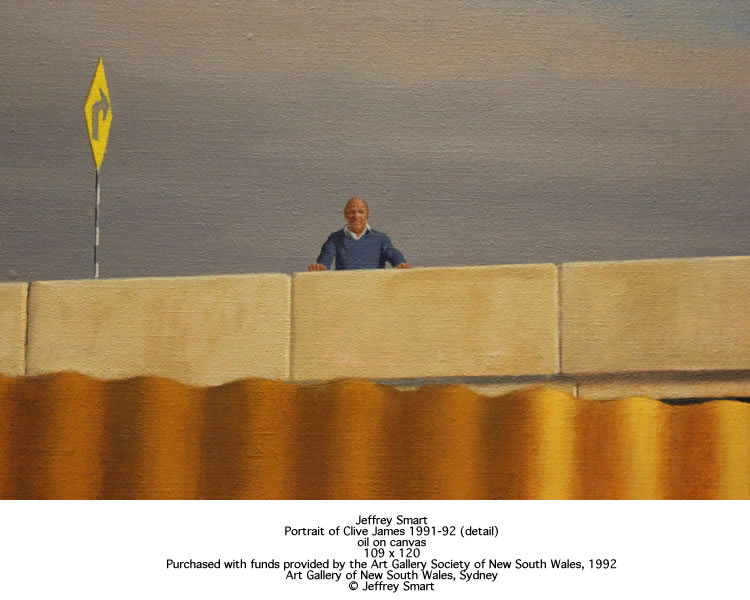 ...and here he is.
A tiny little figure in the landscape!

The viewing of his artworks was made even more interesting by a talk
held in the gallery on the day we saw it,
by Leon van Schaik, Innovation Professor of Architecture at RMIT,
discussing the notion of Terrain Vague,
or undesigned space,
and how it was brilliantly used in Smart's works.

Considering that Smart originally wanted to be an architect,
but instead trained at art school to become an art teacher,
there is something of an explanation in the way he observed designed and undesigned spaces,
and subsequently the way they are portrayed in his works
with so much precision and emphasis on geometry. 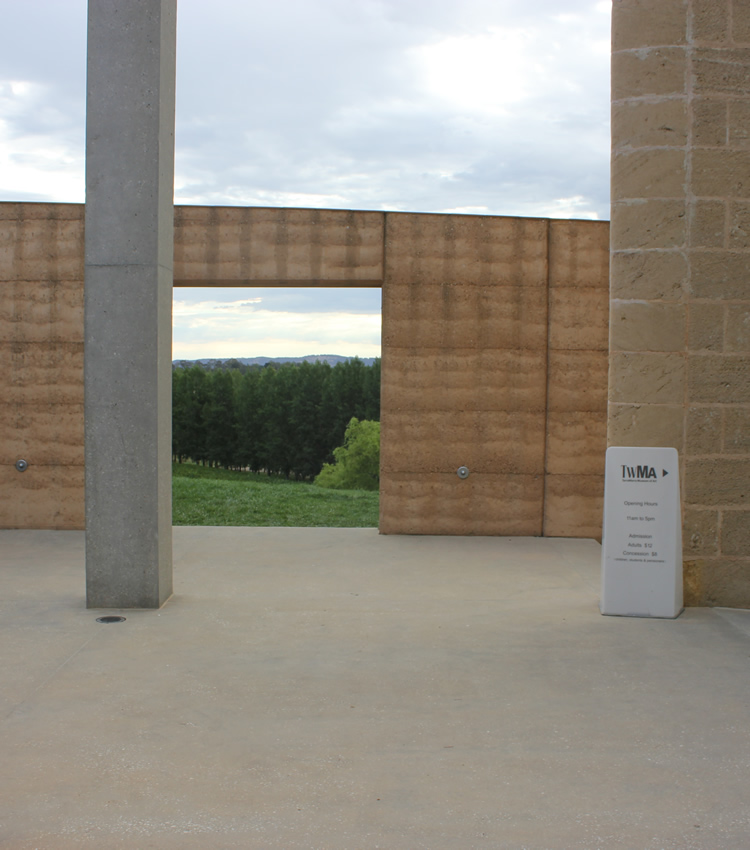 All of which make the TarraWarra Museum of Art the most delicious setting for this exhibition.
Itself a study in positive and negative spaces
(something which my own clients tease me about because I go on about it so),
the building complex has a quietness to it:
largely formed from the juxtaposition of the different shapes and materials. 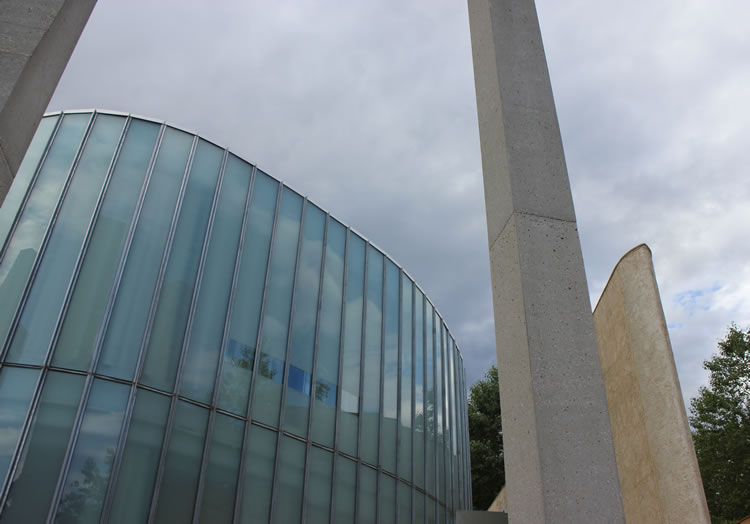 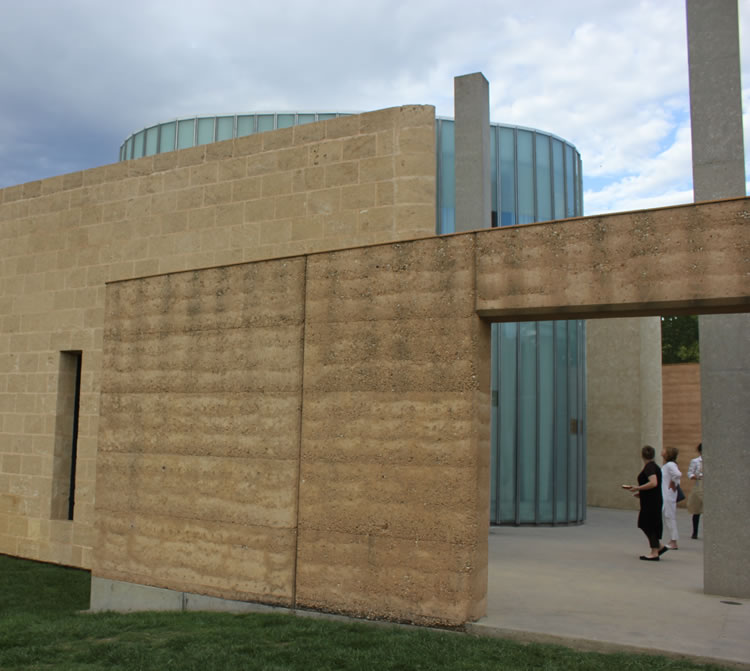 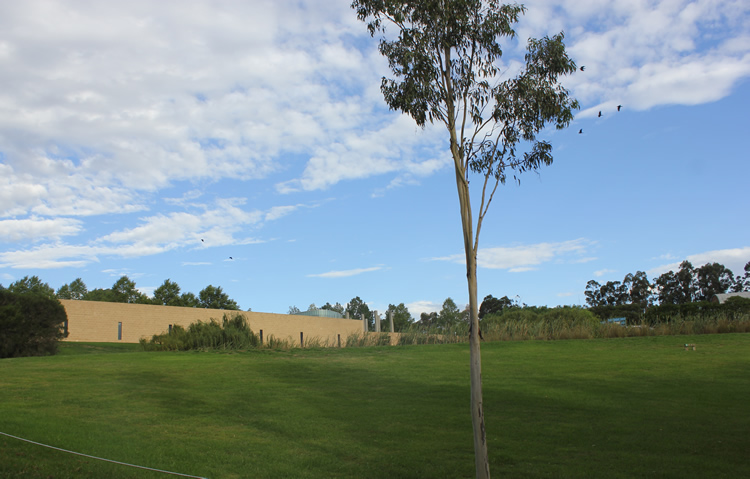 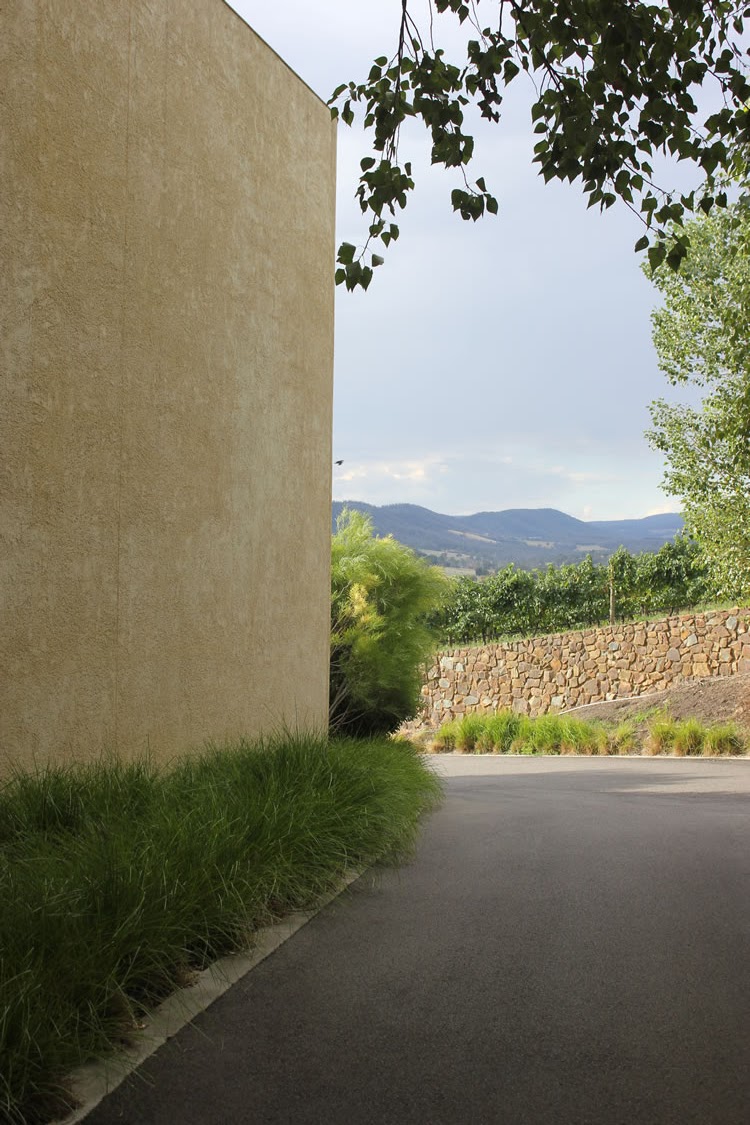 A contemporary art gallery set amongst vineyards,
complete with cellar door and restaurant using local ingredients,
with rolling hills and gum trees in the background...
for me it really doesn't get any more beautiful than this.
It's heaven: a celebration of art, of architecture, of wine and good food,
of the tamed and untamed landscape and always,
that incredible view of the country beyond. 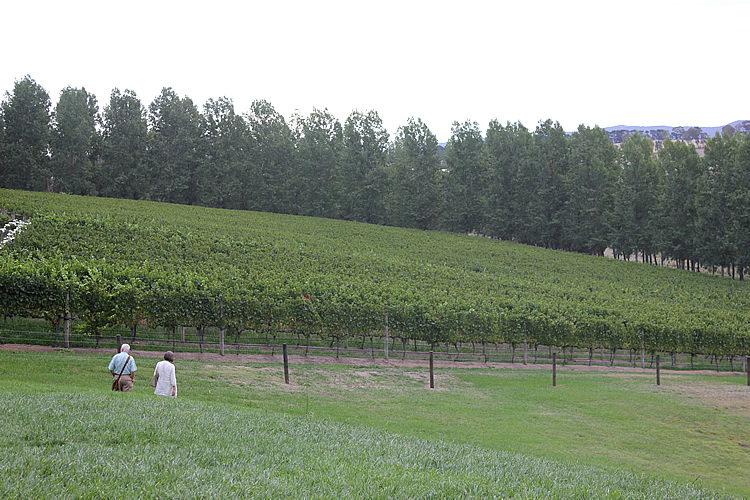 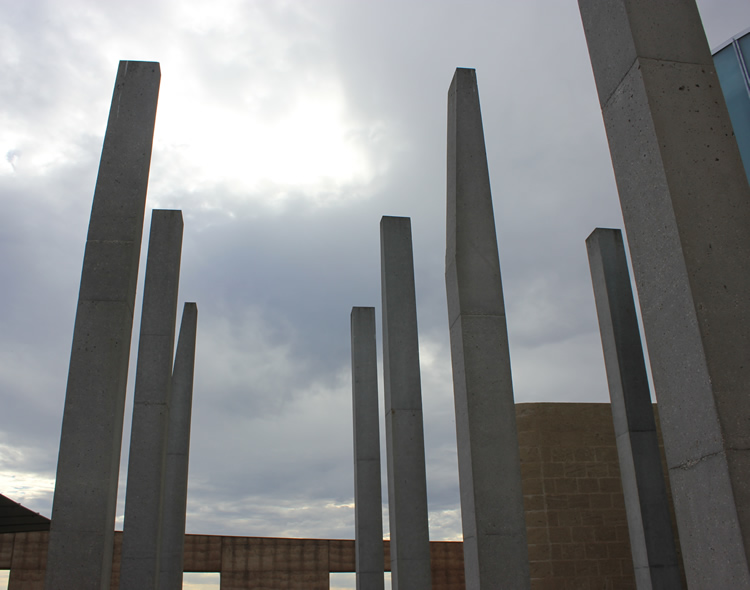 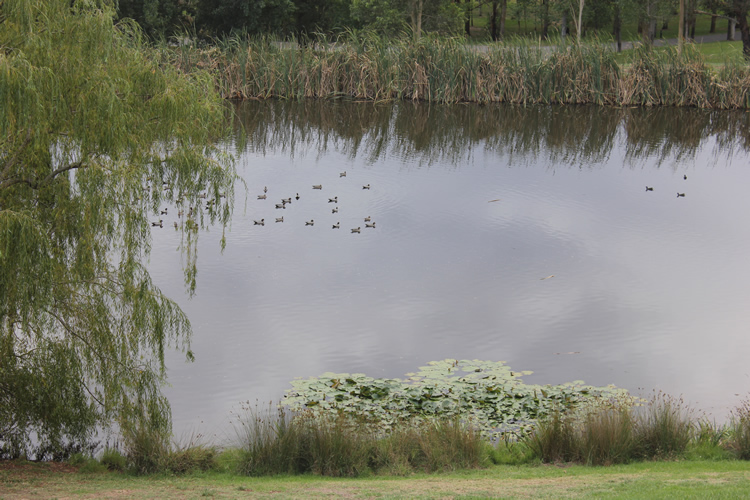 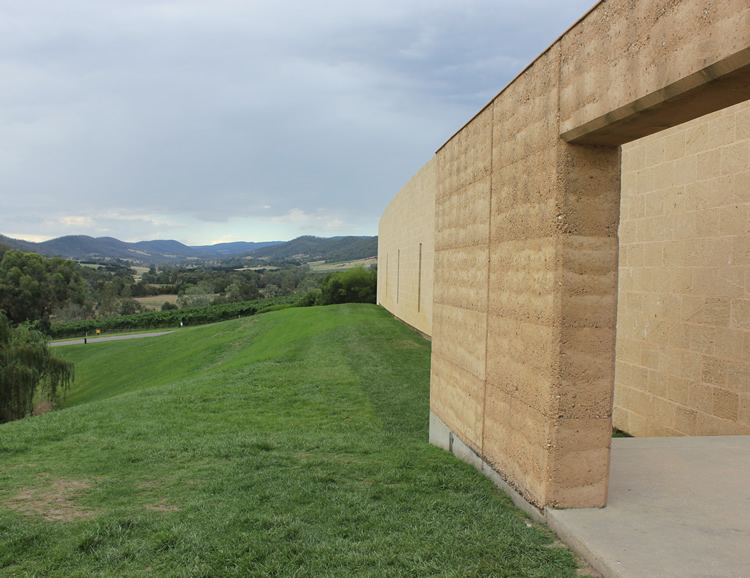 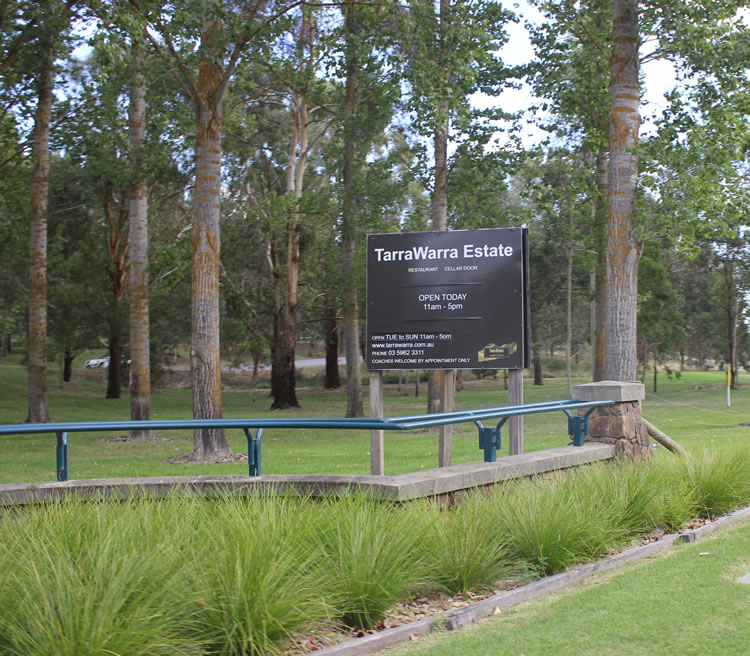 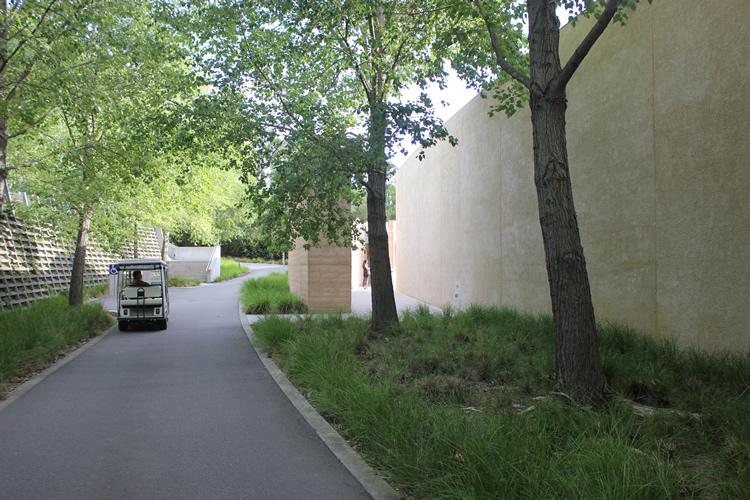 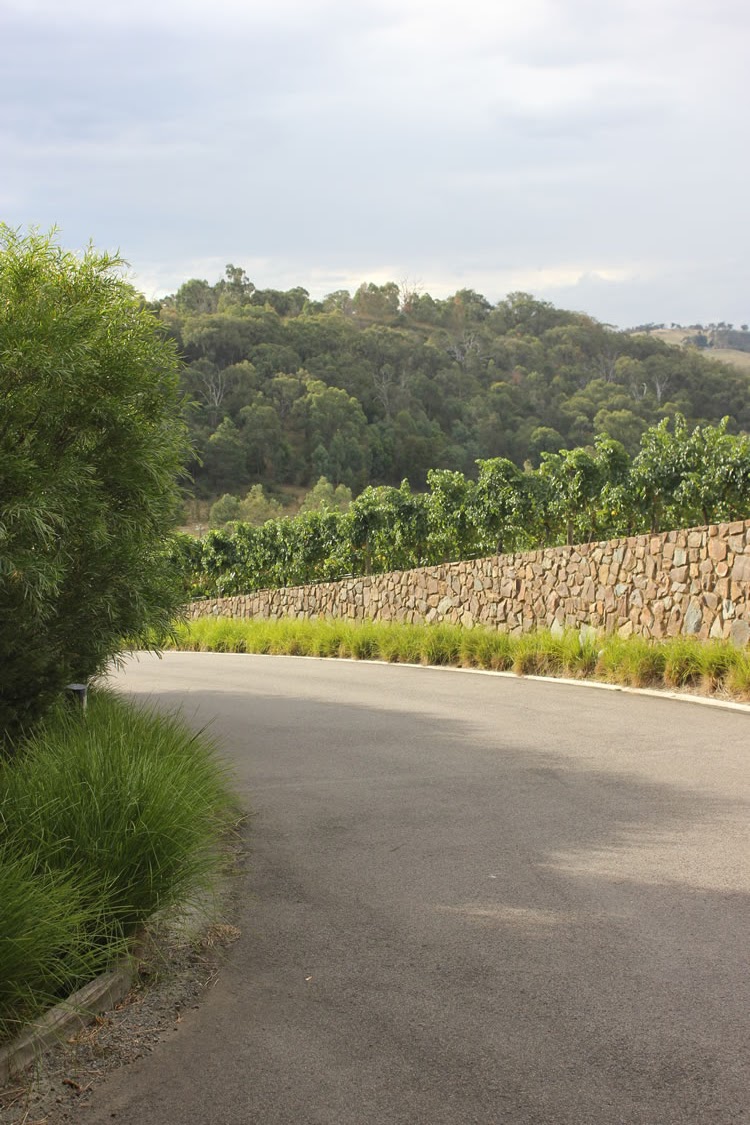 The Museum is at Healesville, so it is just an hour away from the city,
but for those magic moments spent there,
it's a world away from the rush of life,
a place to quietly look around and see
the beauty in the spaces betwixt and between those designed spaces we create.

If you live in Melbourne,
the exhibition continues until the end of this month,
and it's definitely not one to miss.
Details are here.

And if you live elsewhere,
I hope this collection of images and words will inspire you to seek out Jeffrey Smart's work,
represented in galleries all over the world,
and to look for the beauty in terrain vague: those undesigned (yet ever so important) spaces in between
which make up most of the cohesive fabric of our cities.

all images :: blue fruit
Please do not pin or copy any of the Jeffrey Smart images.
They were taken with permission by the TarraWarra Museum
but may not be reproduced.