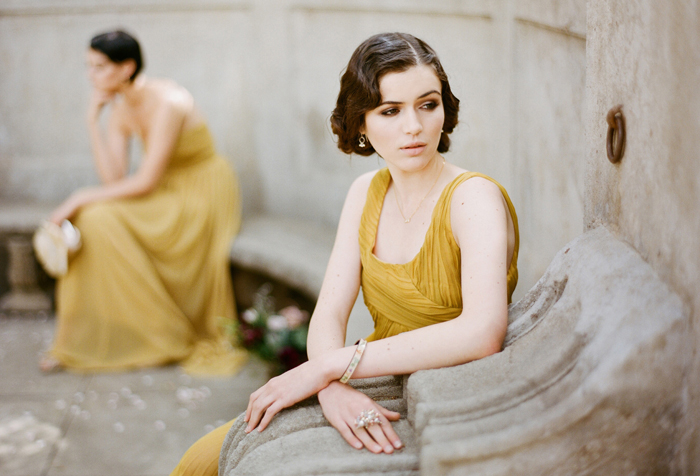 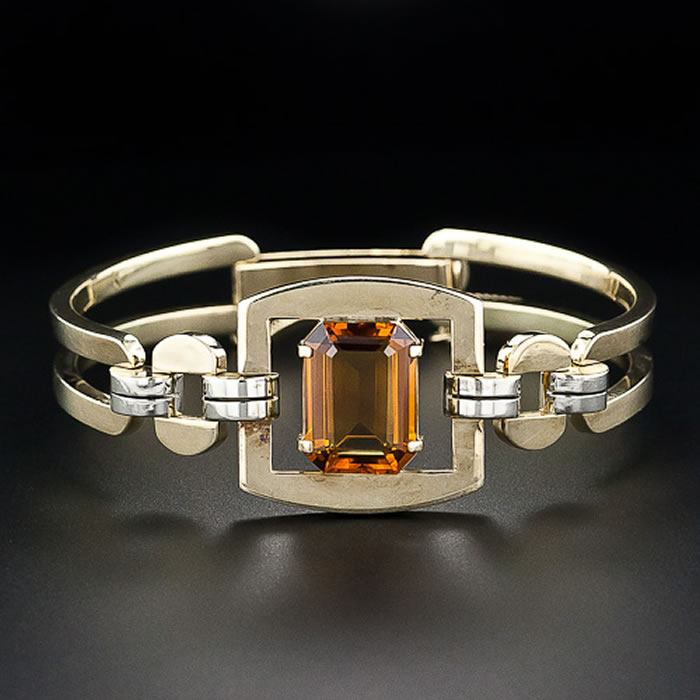 Honey, mustard, amber and gold.
These are the colours of the November birthstones,
the warm golden Topaz + the clear golden Citrine. 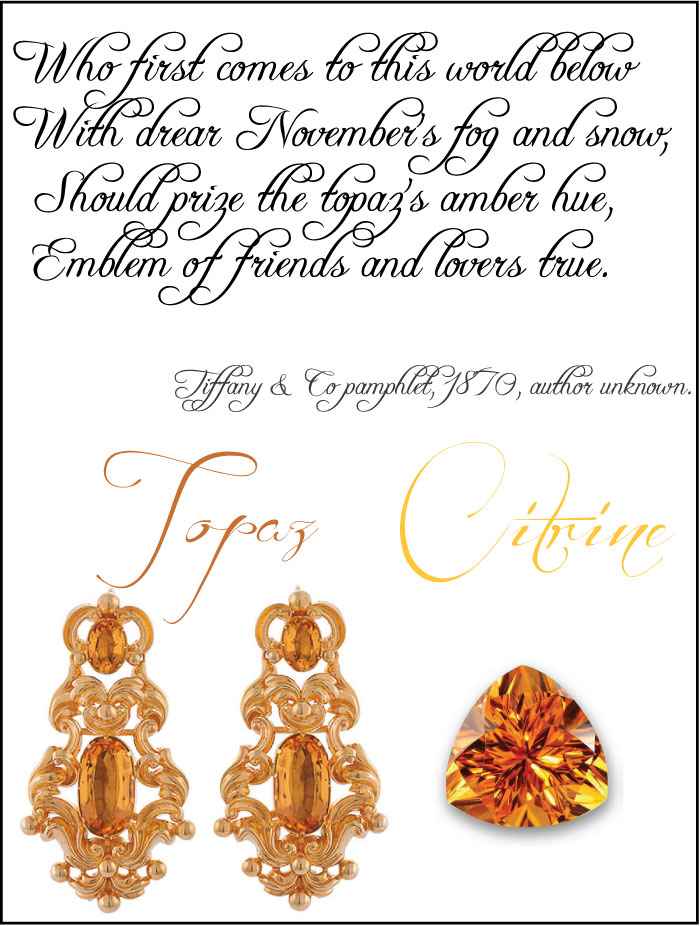 Actually, the Topaz can come in quite a few different colours,
(including blue, yellow, pink and pale green)
but it is this amber version, known as Precious Topaz, which is the traditional birthstone.
Precious Topaz also answers to the name of Orange Topaz,
and it's easy to see why.

Citrine is a slightly cooler tone of amber.
But the stones are so similar that in the Classical and Middle Ages,
the name "Topaz" was used to refer to any yellow stone,
and the lesser valued Citrine was often sold as Topaz. 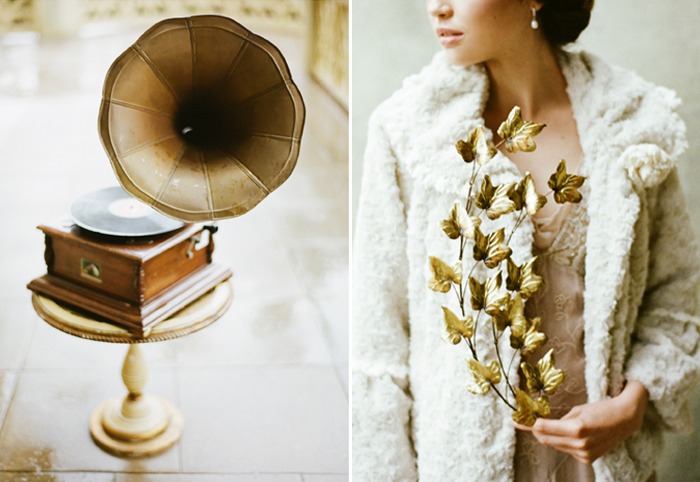 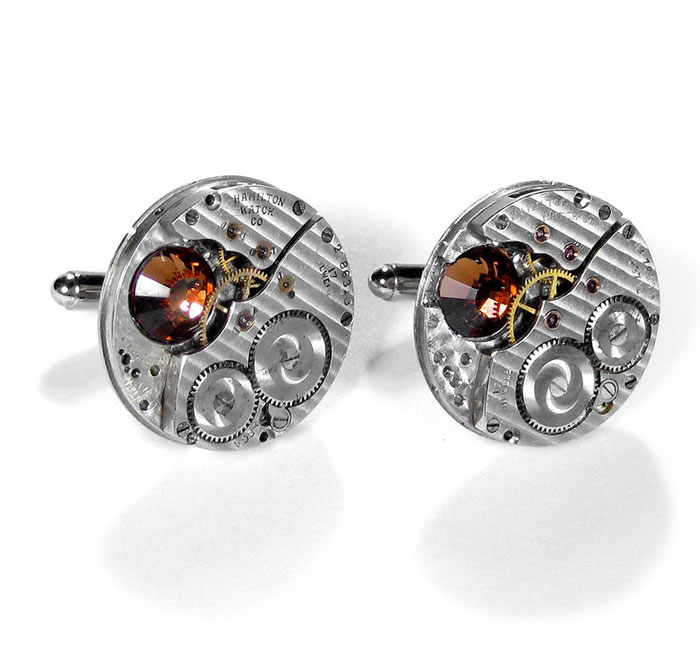 The name "Topaz" is thought to be of Greek origin,
relating to an island in the Red Sea where a yellow stone was mined.
The island was supposed to be somewhat mysterious,
though it may have been St John's Island.
Pliny said that the island of Topazos was a legend only.
The name may have also been derived from a Sanskrit word meaning "fire".
It makes the beautiful stone's provenance much more intriguing! 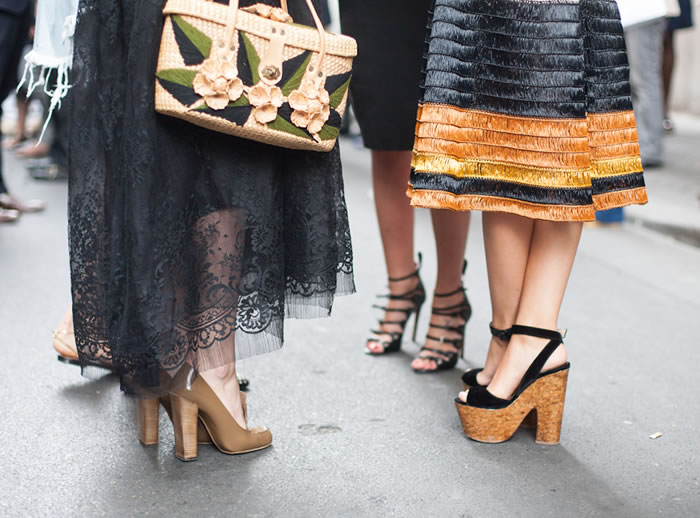 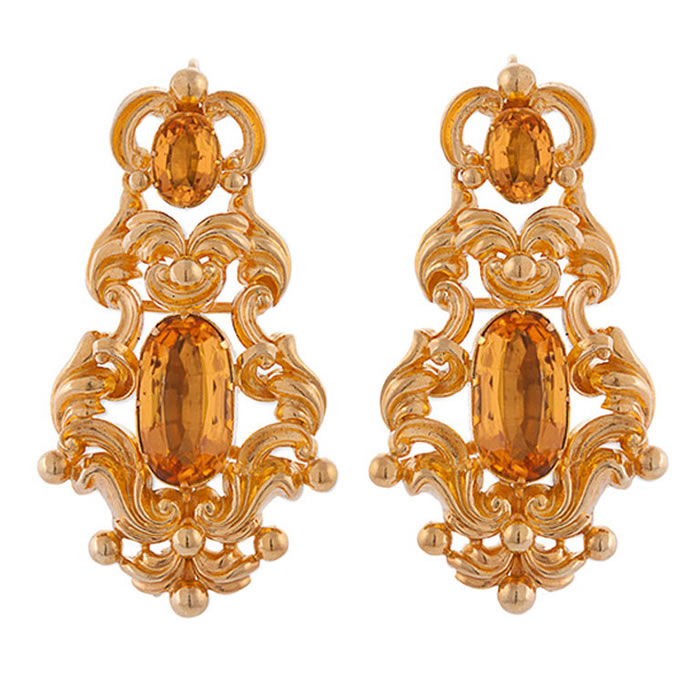 Precious Topaz is a silicate mineral crystal formed from aluminium and fluorine.
Pure Topaz is in fact colourless,
but as is usually the case with the birthstone gems,
the colour is formed from traces of impurities.
It is often heat treated to either intensify or even to create other colours. 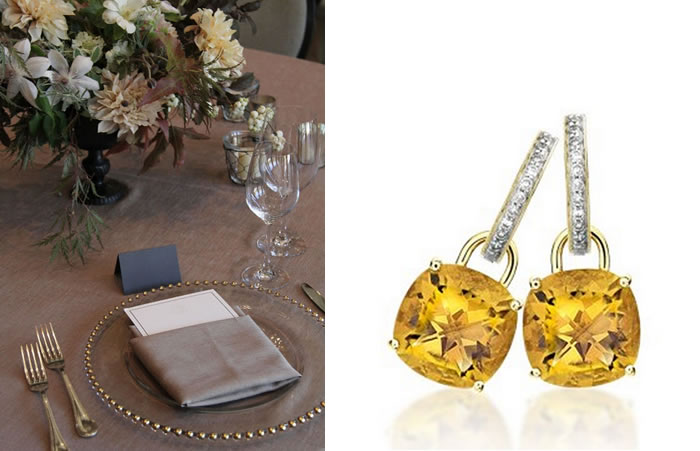 Citrine is a type of quartz and is quite rare in its natural form.
While pure quartz is also clear, trace amounts of iron form the yellow to create a natural Citrine.
(The majority of Citrines used in jewelery are actually heat-treated amethysts.)
The name comes from the Latin word "Citrina" which means "yellow". 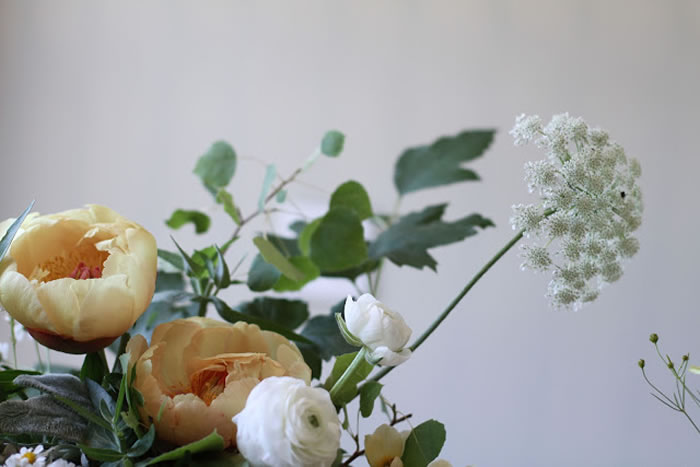 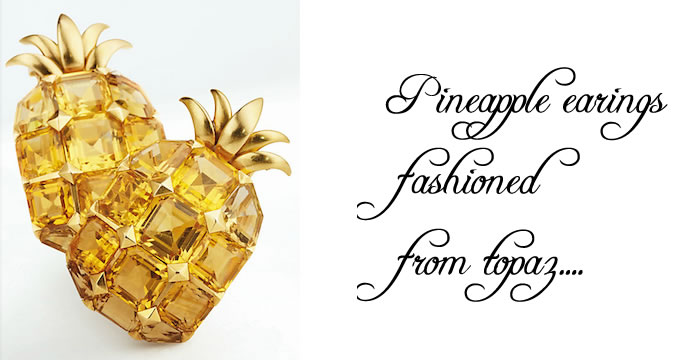 By the Middle Ages, it was a favourite with European royalty and clergy,
partly because of its reputation for cultivating friendship.
Powdered topaz, added to wine, was believed to prevent insomnia.
What a waste of a beautiful stone!

These Topaz-encrusted slippers hold the record for the world's most expensive shoes.
Made in 1962 for Princess Soraya, the Queen Consort of the then Shah of Iran,
they are embroidered with silver thread in delicate filagree patterns.
They were sold in 2011 for €19,750 to Maison Roger Vivier. 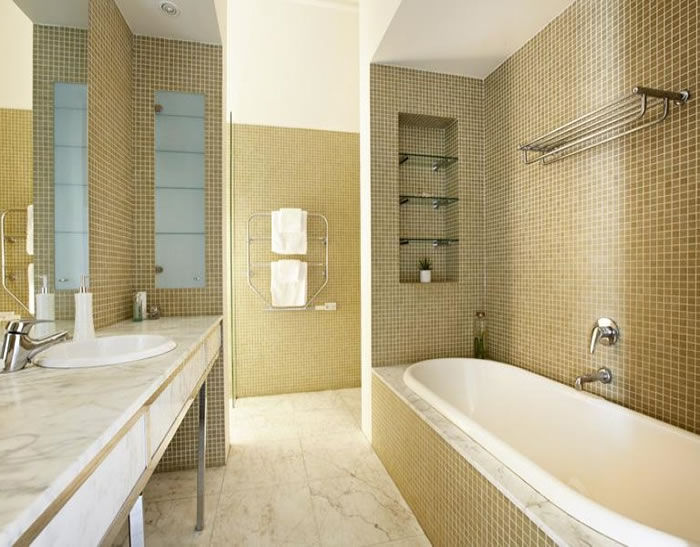 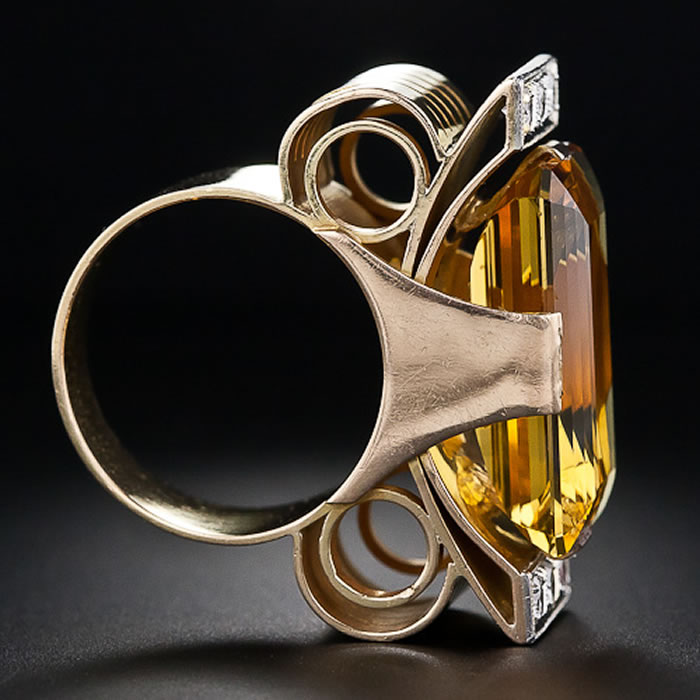 Citrine is associated with health and vitality,
bringing energy, hope and warmth to the wearer. 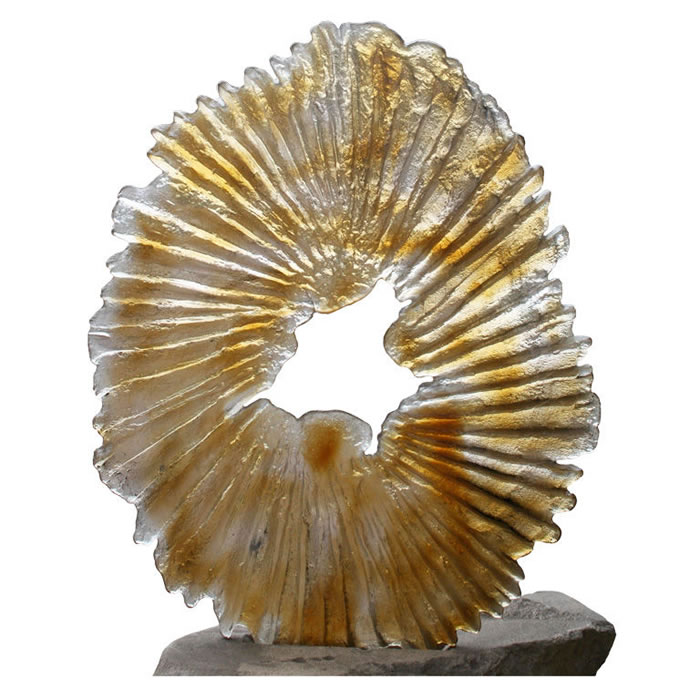 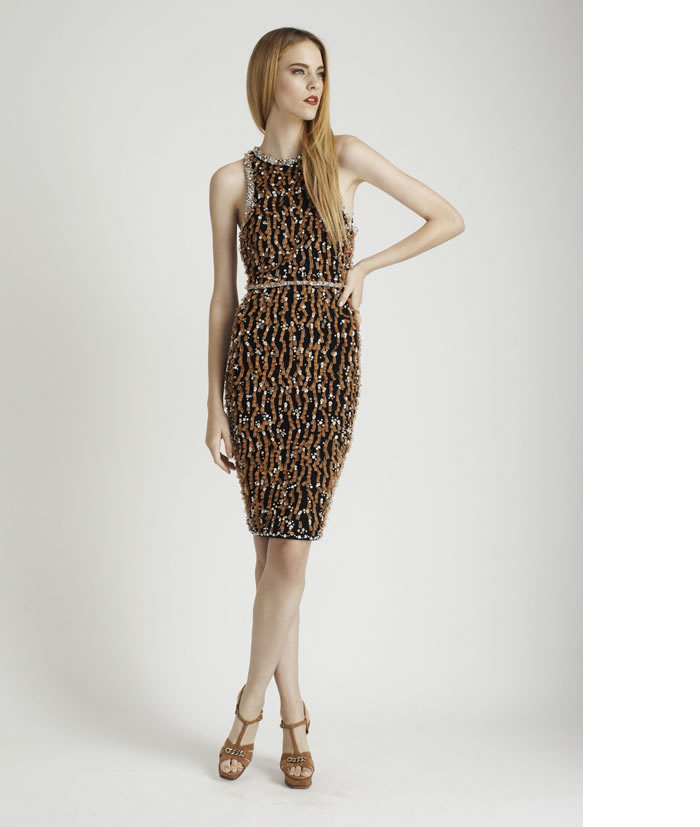 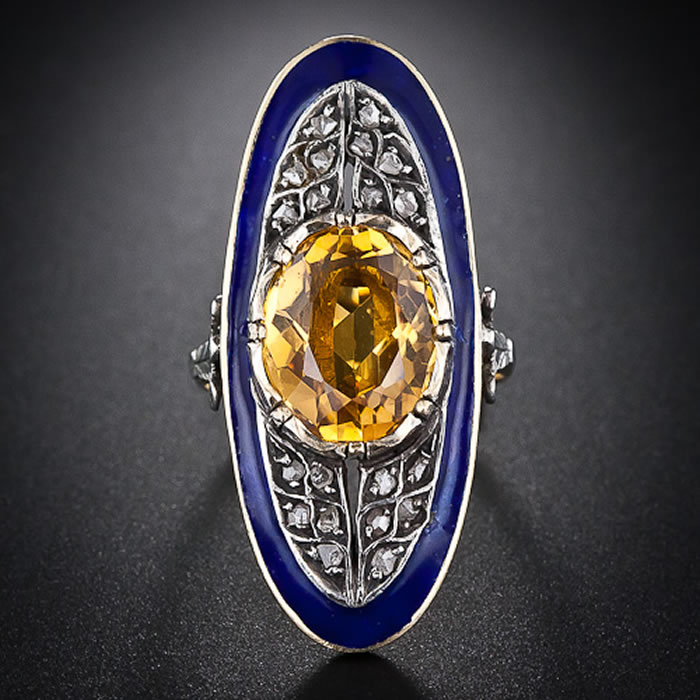 Like the Topaz, most of the world's natural Citrines are found in Brazil. 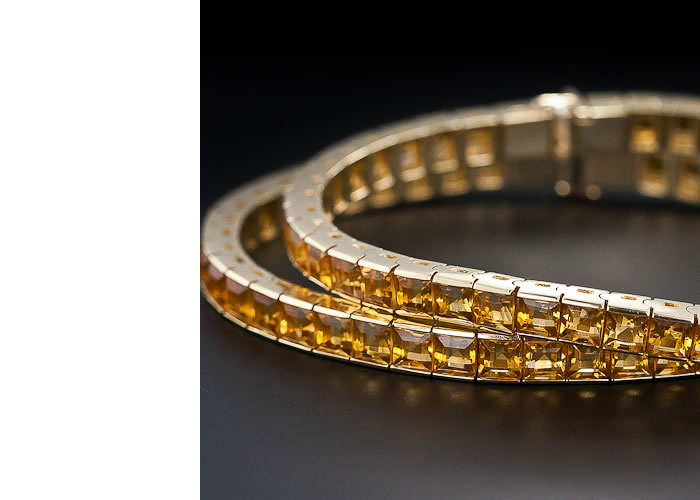 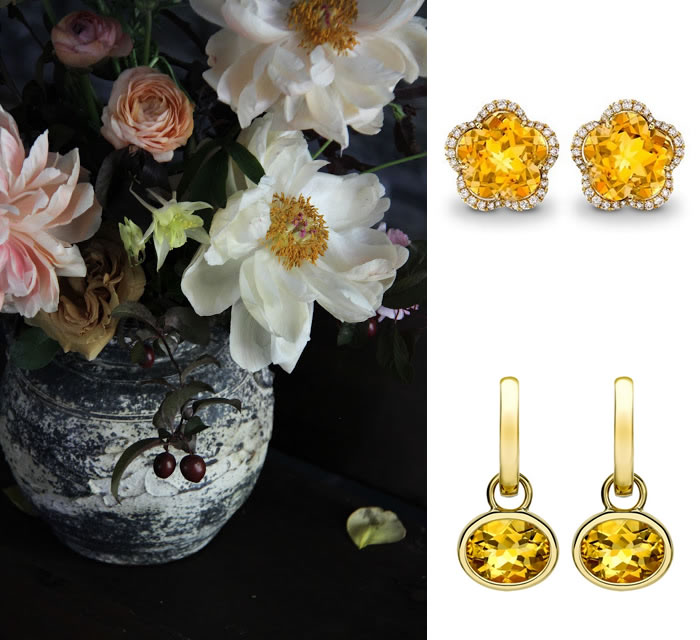 So if you were born in November,
these warmly glowing gems are your birthstones.
I can think of few people who couldn't wear such wonderful stones.

Whether worn on fair or dark, the golden tones radiate their own fire, their own intense luminance,
bringing a touch of beauty wherever they are used.